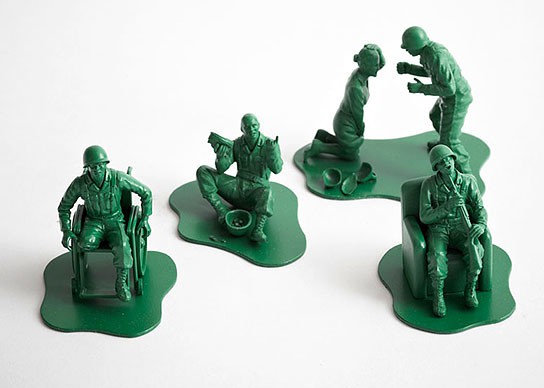 think of the little toy soldiers that guys used to play when they were a child. now, think of the flip side of the war such as the social unrest and psychological trauma that war veterans suffer. put these together and you will get Casualties of War as created by Dorothy, a group of like-mined people that design stuff. these figurines are styled in the familiar green toy soldiers form which most of us are familiar with. i have a bunch those when i was kid but that doesn’t do anything positive except for encouraging wars. however, Dorothy’s 7-cm (2.76-inches) tall plastic moulded figurines speak of something more sinister behind the face of war. here’s an excerpt how these tiny art sculptures come about:
[ad#Google Adsense-text-468×60] [quote style=”boxed”]The hell of war comes home. In July 2009 Colorado Springs Gazettea published a two-part series entitled “Casualties of War”. The articles focused on a single battalion based at Fort Carson in Colorado Springs, who since returning from duty in Iraq had been involved in brawls, beatings, rapes, drunk driving, drug deals, domestic violence, shootings, stabbings, kidnapping and suicides. Returning soldiers were committing murder at a rate 20 times greater than other young American males. A seperate investiagtion into the high suicide rate among veterans published in the New York Times in October 2010 revealed that three times as many California veterans and active service members were dying soon after returning home than those being killed in Iraq and Afghanistan combined. We hear little about the personal hell soldiers live through after returning home.[/quote]

it is a scary thought, indeed. it is one side effect of war that we are not aware or hardly hear about. this brings us to a question: today’s soldiers are technologically advanced and physically fit but are their psychological health up to speed to handle the aftermath of a war? that’s is probably something to think about. don’t you think so? hit the jump to see a few more close-up images of Casualties of War by Dorothy. oh, and these awesome figures aren’t for sale. what a bummer isn’t it?