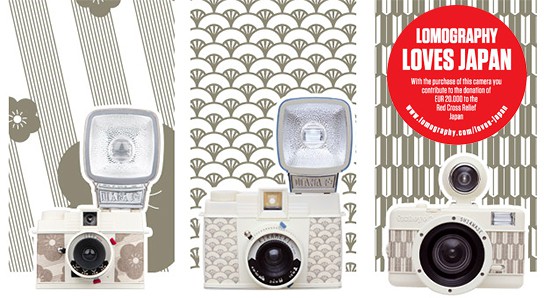 Lomography just announced three special edition cameras, the Diana & Flash, the Diana F+ and Fisheye 2. these three cameras were originally conceived to commemorate Japan’s Golden Week, but now these cameras have take on a whole new meaning. with the purchase of each camera, 20 euro will be donated to the Red Cross Relief Japan.
[ad#Google Adsense-text-468×60]

the three cameras feature intricate pattern design on its body in a beige/brown theme, while the overall camera has cream white paint job. each model, has a Japanese name assigned to them such as the Diana Mini JIYU – Freedom, the Diana F+ KIRAMEKI – Sparkling and the Fisheye 2 SHIAWASE – Happiness.