OK. This one isn’t new. In fact, it was posted by Sunshine Coast Snake Catchers in March, but it is still fun if you haven’t had a go at it. In a post in on March 20, the Australia snake catching company challenged its follower to spot the snake in the photo you see above. It even offer “bonus points” to those who can name the species. I did try. Man, my eyes hurt because, all I see is a pile of mix bag of twigs, dead leaves and branches. OK. Maybe mostly leaves.

I can’t even spot the snake to begin with, much less naming it. If you are down for it, go ahead and try seeing if you see the snake camouflaged within this concoction of forest floor debris. Scroll down for the answer after you have tried, or if you just want the answer.

So, are ready for the answer? Alright, here goes… it was revealed in a subsequent post on the next day that the snake was in fact hidden almost under the fallen tree trunk to the top left of the photo, partially buried by some brown leaves. It was a perfect camouflage indeed. It does make me squirm a little knowing that a snake could be in a location where unsuspecting humans could be stepping on. It’s all good if the snake isn’t venomous, but unfortunately, it isn’t.

And here’s the zoomed in image of the answer. You see the snake now? 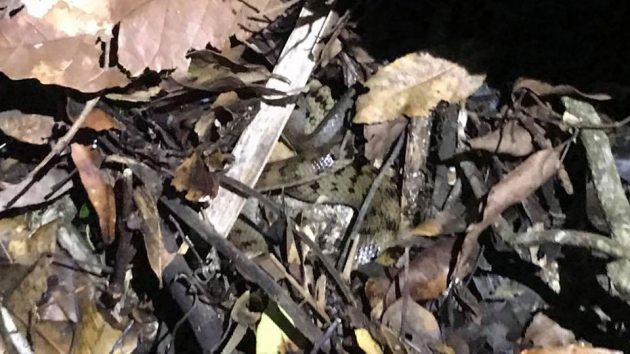