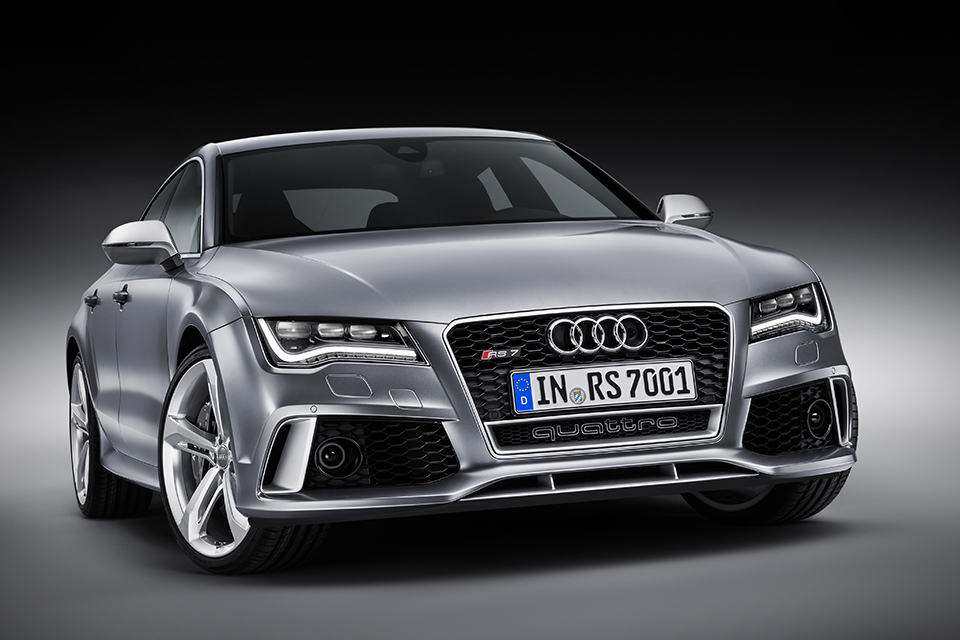 in an auto market where the line between a sports coupe and a sedan became blur, came the 2014 Audi RS 7 Sportsback (yeap, that’s the official name – we didn’t make it up). with a model named ‘RS’ and bearing the word ‘Sportsback’, you know Audi is gunning this ‘large five-door coupe’ (that’s what this car is referred to be the Ingolstadt folks) as a no nonsense performance ride with all the practicality you will need. its stellar century sprint performance of a mere 3.9 seconds and a top speed of 305 km/h (190 mph) is made possible by its 4.0 TFSI TwinTurbo V8 engine that pumps out 560 horses (412 kW) with 700 Nm (516 lb-ft) of torque, mated to a standard eight-speed tiptronic gearbox. and it is not just the brute force it has: despite its awesome prowess, the RS 7 Sportsback is no thirsty beast – it drinks just 9.8 liters of gas per 100 km (or 24 US mpg). its immense power is complemented by a matching aesthetic and handling elements including a sporty fastback design, fuel efficient cylinder on demand system, quattro all-wheel drive, xenon plus headlamps, 20-inch forged lightweight wheels, larger six-pod calipers with vented discs all round, Electronic Stabilization Control (ESC), adaptive air suspension and a rear end that features a power extending spoiler, diffuser and two large, elliptical tailpipe trims. the inside is equally RS-appointed like you would have expected with RS sport seats in black Alcantara and leather, carbon inlays, a tire pressure monitoring system, three-zone automatic air conditioning, aluminum-look finish across its footrest, pedals and soft keys on the standard MMI navigation plus terminal and wrapping up with an Audi sound system. as to when the 2014 Audi RS 7 Sportsback will be rolling into the showroom near you and how much would it cost, are still unknown. nevertheless, do not let the lack of information hampers your enjoyment of a few more images available below.