If you have grown tired of constant traffic jams, giving up driving and hoping on taxis and ride sharing cars won’t help you get out of the gridlock. Trains like subways sound like a good idea, except that you have to rub shoulders with many. Not exactly the ideal solution, is it? What you need is a transport that zips overhead, up in the sky, you know, a flying taxi of sort. But the flying taxi of the future won’t be Korben Dallas’ kind of flying yellow cab; it would be more of an aircraft-ish transportation like the Airbus Group Project Vahana Flying Car Concept.

As you can see in the picture above, Vahana is clearly not a car; it is a vertical take-off and landing (VTOL) aircraft that’s basically embodies the best of both worlds: the speed and range of an aeroplane, and the vertical and landing ability of a helicopter. The latter is what makes this VTOL suitable for tight urban landscapes where runaways will not be available. We are not sure about the downwash issue and if Vahana would be zipping in between skyscrapers like Hollywood movies often depict, or way above the skyline. 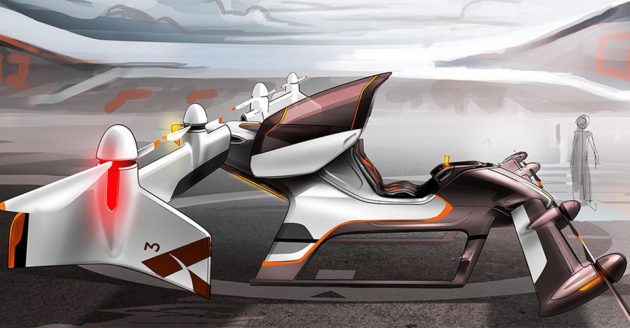 Whatever it is, you can’t deny Vahana is one heck of a cool concept, but as cool as it looks, do not hold your breath for it to happen anytime soon. According to a report, it would be 10 years into the future before we start seeing such vehicle plying the sky above and also, it won’t be yours to acquire as the plan is to make Vahana into an air taxi of sort, or a ride-sharing service, if you will.

So am I excited? Well, lets just say that I am still waiting for Korben Dallas’ kind of flying yellow cab to be realized. Come’on aerospace industry, we seriously need a revolutionary propulsion system, or at least an anti-gravity technology to make it happen.