Apple, who seems to be always late in the game, somehow managed to sell technologies which others had a head start. Virtual reality is one example, though it will be a while before Apple’s iteration of VR headset will hit the streets since it has just granted a new patent for “Head-mounted Display Apparatus For Retaining A Portable Electronic Device With Display” by The United States Patent and Trademark Office. As with any patent, the paper, which you can find HERE, has an exhaustive list of details that goes into this future Apple VR headset which turns out to be more of an eyewear than a face-hugging headset like so many have done thus far. 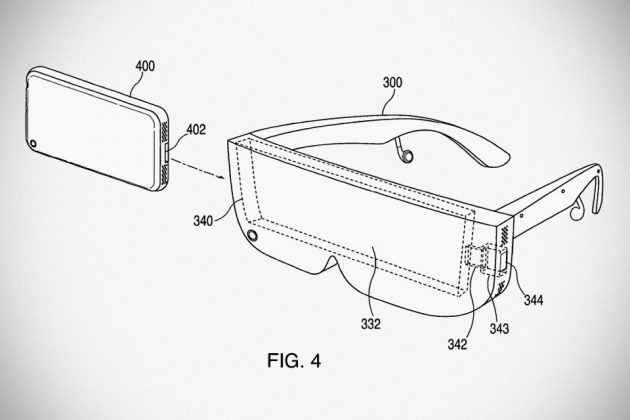 Apple’s proposition is minimal in that it, as mentioned, resembles more of an oversized eyewear (read: sleeker) that could accommodate a smartphone upfront. It has all the requisite details of a VR headset such as opening for smartphone’s main camera, built-in speaker, connectors or jacks, buttons for controls, plus a section where the memory, sensors, processor and whatnot are located – just to name a few, and most notably, it appears to be outfitted with its own battery, meaning that it won’t leech on your iPhone’s juice as you use the VR headset and also possibly, there will be more active functions as opposed to the more passive variety offered by some of today’s VR headsets.

Passive VR headset, as we like to call it, is merely a ‘vessel’ to a smartphone for VR content consumption which in reality, anyone can cobble up one without having to spend much. Active headsets, however, is powered, often by the smartphone’s battery docked in it and also sometimes boasts a variety of sensors that works in sync with the mobile device for an even remarkable VR experience. Apple’s “Head-mounted Display Apparatus For Retaining A Portable Electronic Device With Display,” naturally falls into the latter. You can get more information to picture what Apple’s future VR headset will be like if you diligently scour through the 51-page patent paper.