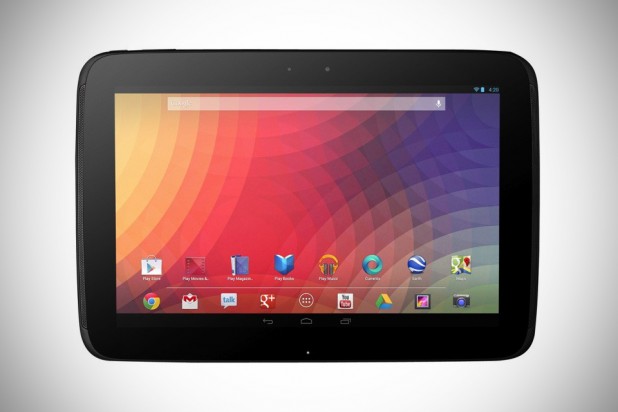 so you think the Retina display of the iPad is stunning? wait till here about this new eye-watering kid on the block: the Google Nexus 10 Tablet by Samsung with an incredible 2,560 x 1,600 resolution, packing in more than 4-millions pixels with 300 ppi into its 10.055″ touchscreen display with Corning Gorilla Glass 2. other key features include a dual-core A15 processor working along side Mali T604 GPU, a full 2GB of RAM, up to 32GB of onboard storage (non-expandable, unfortunately), a 5.0-megapixel main camera and a 1.9-megapixel front-facing camera, WiFi, Bluetooth, NFC, micro USB, micro HDMI, 3.5mm audio headphone jack, magnetic Pogo pin charger, built-in microphone, and a host of today’s standard sensors such as accelerometer, compass, ambient light sensor, gyroscope, barometer, as well as GPS. the Nexus 10 packs a huge capacity 9,000 mAh lithium polymer battery pack that offers up to nine hours of video playback and over 500 hours of standby time (about 20-odd days). the tablet offers the ability to add multiple users and easy switch between them right from the lockscreen, and it will come loaded with the latest Android 4.2 Jelly Bean. mind-blowing? not yet, till you hear about its pricing: it will only cost you $399 for the 16GB model, while the 32GB will set you back at a mere $499. available from November 13, 2012 on the Google Play store in the U.S., U.K., Australia, France, Germany, Spain, Canada and Japan. U.S. residents can also grab the 23GB version from more than 2,000 Walmart stores in the U.S.