When disaster strikes, communication is as important as basics like water and power. The importance of communication cannot be overstated and understanding this, U.S. telecommunication giant AT&T has a drone helicopter, aptly called Flying COW (Cell on Wings), that will serve to provide temporarily cell services, including data, voice and text. The unmanned heli is an experimental technology currently deployed in Puerto Rico after the Caribbean Sea island state was swept by Category 5 Hurricane Maria, the worst natural disaster to hit the Dominica. 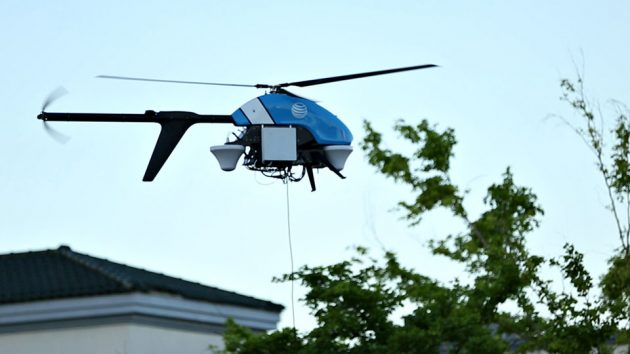 Hovering at an altitude of between 200 and 400 feet (60-120 meters), the Flying COW has a cell service coverage of up to 40 square miles (about 104 square kilometers). AT&T said its Flying COW offers a wider coverage than other temporary cell sites, though admittedly, we have little to no knowledge of the range of these “other temporary cell sites,” so we just have to take the communication company’s words for it. At the time of the writing, the drone is reportedly hovering in San Juan area, but it will be moved to other areas requiring the service, including a military hospital at Manati Coliseum. Ermmm, where’s that exactly? TBH, I have absolutely.

Then again, we probably don’t need to know. All we need to know that drone technology will have a significant role in disaster relief in an unfortunate disaster like this. It is ready to deploy with minimum hassle and the fact that it can be relocated swiftly as and when it is required is a huge plus. Check out the official video of the Flying COW after the break.