When you take a wink, no matter where you are, you will always face with the same threat: brightness. I am cool with that, though I can’t say the same for the rest. For the ‘rest’, the maker of Ostrich Pillow, Studio Banana has a perfect solution, a total retake of the traditional eye mask called Ostrich Pillow Loop. The Ostrich Pillow Loop is unlike any eye mask you have seen. Touting an one-size-fits-all solution, this compact eye pillow wraps around your head in manner of a cross, turning you into a X-men Cyclops of sort. Or at least, that’s what I thought it looked like. I vaguely remember Scott Summers did have a cross across his face in Earth-616. 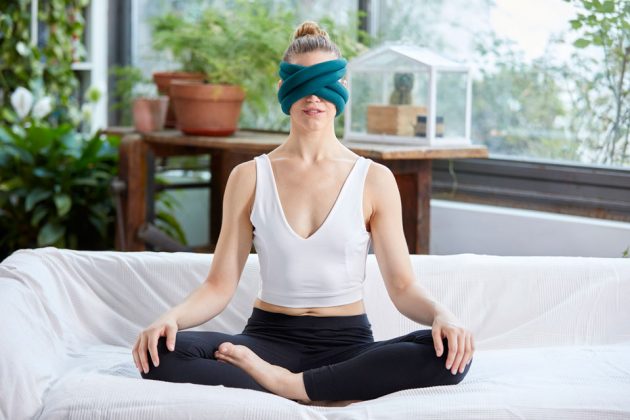 Obviously, this ‘cross’ across your face won’t make you blast building-tearing laser. Still, it looks kinda of cool. It is, how do you say? It serves its purpose while looking somewhat out-of-the-ordinary. An important point if individuality and breaking conventions are your cuppa. Anyways, instead of just a piece of fabric which allows light to sip through, Ostrich Pillow Loop is soft and plushy. Packed inside this single “strand” of loop is a micro bead core which conforms to your face contour, thereby preventing any light from reaching the windows to your soul. Apparently, it works just as well even when you had headphones on too. Sweet.

Seriously, this ought to be a breakthrough in eye mask “technology”. It look pretty futuristic and kind of make you look like a traveler from future. OK. I know. I may be exaggerating here, but you get the idea.Once again, Studio Banana has taken to Kickstarter, a place that started it all. The young, avant-garde company is confident of its crowdfunding endeavor that it promised to deliver the product even before the campaign ends. The first in Kickstarter’s history. So, if you want one, you can give the campaign a nudge towards its $50,000 goal by picking the Ostrich Pillow Loop as a pre-order for $25 a pop. Have a look at the pitch video after the break.