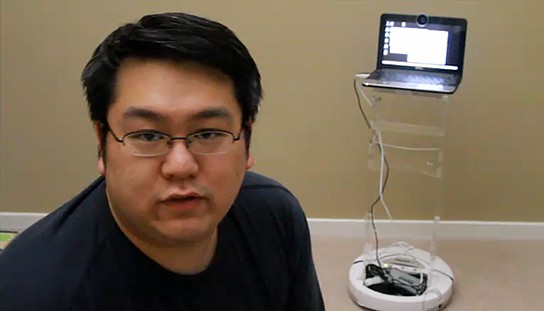 when Johnny Chung Lee was temporarily separated from his fiance, he decided to device his own version of telepresence robot to keep in touch with her, instead of just relying on the traditional web cams. the robot in question consists of two major components, a netbook which he purchased for about $250 and an iRobot Create, an affordable educational robot which he acquired for about $250. with his Video Chat Robot, Lee can now navigate around his former home as well as chatting with his fiance without being confined to the desk.

bridging the gap between the netbook and the iRobot Create is a custom software written by Lee, which controls the robot movement and communication is via the freely available video conferencing software such as SKYPE. Lee took a step further by integrating the charging of the two components into a one step charging process. however, Lee is quick to point out several disclaimers with regard to this process. with just one click, Lee is able to direct the robot to seek out the docking station for charging. this of course, was a built-in feature of the Create which Lee integrated into his hack.

like all good hackers, Lee has made the VideoChatRobot software including the source and documentation for the dock modifications available for download at his blog. so for those who aspires to create a Video Chat Robot yourself, here’s your opportunity to do so. meanwhile, check out Lee’s video on his awesome creation after the jump.

procrastineering via Hack A Day