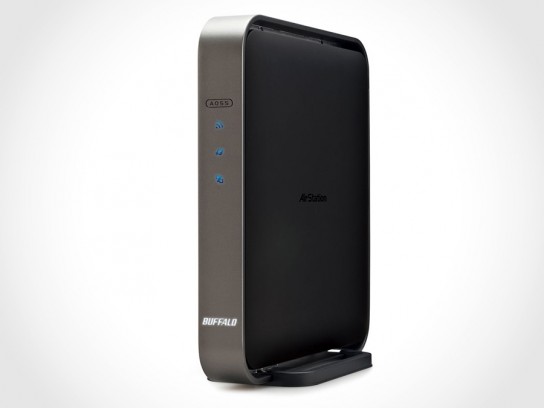 broadband or fiber optic network is speedy but is your home wireless network as fast? these days we have mega size multimedia contents, which call for a more reliable and fast wireless network to deal with them. the Buffalo AirStation WZR-D1800H (official quite-a-mouthful name: AirStation AC1300 / N900 Gigabit Dual Band Wireless Router WZR-D1800H) is what you will need. aesthetically, it is no doubt sleek but what we are excited about is what it can do. the WZR-D1800H is a 11ac wireless router that supports the next generation 802.11ac wireless protocol and features simultaneous Dual Band support (5GHz and 2.4GHz, respectively). the two wireless radios offers up to 1300 Mbps and 450 Mbps simultaneous transfer speeds, ensuring you will have an uninterrupted HD video streaming and concurrent Internet access. other features include enhanced signal strength and increased range, five gigabit Ethernet ports to meet your home network needs, multi-level wireless encryption with AOSS and WPS push button setup, backward compatibility with 11a/g/n, and a USB port for ease of file sharing, media streaming or adding a printer to your home network. the Buffalo AirStation WZR-D1800H is available now with a price tag of $179.99. more look after the break.