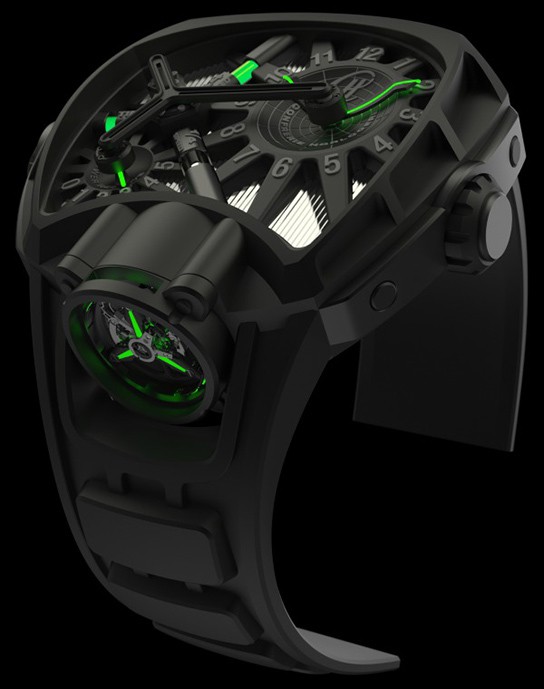 new from Hublot is this La Clé Du Temps wristwatch that reeks of luxurious futuristic complexity or at least, this is how we sees it. it is one timepiece that stops us on our track and we just kept ogling at it. this limited edition timepiece is part of a series of most futuristic and exclusive works by the Swiss luxury timepiece firm and it is by no accident that it is named La Clé Du Temps, which means “the key of time.”
[ad#Google Adsense-text-468×60]

for some reasons which we could not phantom, the watch has the capability to slow down or hasten the time as and when the wearer sees fit. hence, giving the wearer controls over the time as the way he wants it. that’s one timepiece that will please any control-freaks. although, i doubt you can slow down time when you’re running late for an appointment or hasten it when you get bored with a movie. the gear-inspired clock face reminisces of the movie Dark City (New Line Cinema, 1998), where The Strangers has control over time in the city.

the watch features a vertically mounted tourbillon that resembles some propulsion system and of course, a crown that lets you manipulate the time. the cool part about this is that the watch movement will always remember the correct time – thus when you decided a break from the time control, you can always switch it back to the normal mode without messing up the actual time.

NOW READ  Here’s The New Baby-G x Pokémon Watch. It Still Does Not Have Yellow Colorway

so far, little is known about its technical specifications and it will stay this way until March 2011. the La Clé Du Temps simply look amazing, but we are betting that it’s going to be a high six-figures super luxurious watch.