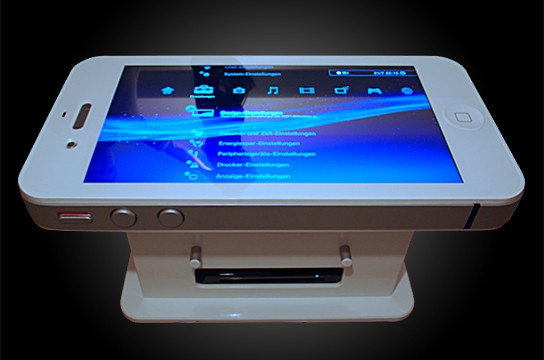 one dude by the name of Benjamin Bachmeier has created something that might just put a smile on every iPhone 4 fans – white iPhone 4 to be exact. Ben’s creation is an oversized tabletop computer resembling the much sought after iOS device. simply dubbed as iTableous, this beautifully crafted giant white iPhone 4 is blessed with Zotac Ionitx A-E 2.01GHz processor, 4GB DDR2 RAM, 500-GB hard drive, SuperDrive CD/DVD-RW, a 5.7-megapixels camera with 720p video recording capability and a host of connectivity that includes line-in port, USB, HDMI, eSATA, S/PDIF, DVI, Ethernet port, WiFi and Bluetooth. there is even a regular Apple 30-pin dock connector concealed under the Home Button to hook up to your real deal iOS device.
[ad#Google Adsense-text-468×60]

those buttons you see on the iTableous? there are functional too! albeit being assigned with different functions. additionally, this giant white iPhone is a dual booter that runs both Mac OS X 10.6.7 (via Hackint0sh) and Windows 7 Professional. oh, for those curious minded beings, the display is a 40-inch Toshiba LED backlit LCD TV, protected by a 8-mm Plexiglas. so strictly speaking, the iTableous can double as a functional table too. Ben even go to extend to create a iTablenous specs sheet [PDF] that looks just like Apple’s. Ben’s detail to attention is indeed commendable. check out the iTableous in action in the video after the break.