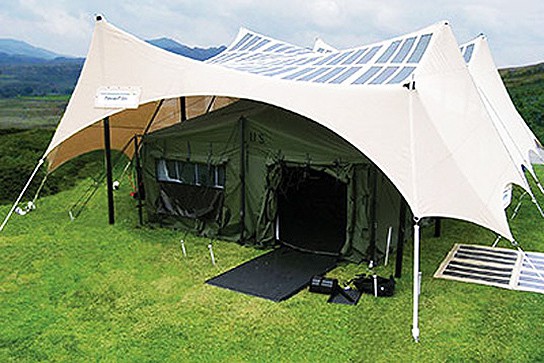 while solar energy is not uncommon in the commercial sector, its application in the military is few and far between. however, this might just change with the U.S. Army current evaluation of the possibility of harnessing the power of the sun through the use of transportable solar-powered tents.

currently, three products are being evaluated, namely: Power Shade, TEMPER Fly and QUADrant. pretty fancy names, i must say. these tents has Flexible Photovoltaics (PV) built-in them and are capable of the generating between 200 watts to 3 kilowatts of electricity. of course, the physical size of the tents are different too.

traditionally, portable batteries or generators are used to supply field tents with electrical power, hence with the solar-powered tents, the these traditional way of supplying power in field could be a thing of the past. no more lugging of batteries and fuel around as the tents get redeployed from places to places, not to mention it’s environmental-friendly and saves on cost for deployment in the field.

all we need to established now is the storage of the harvested energy. certainly, the storage must be ample, able to keep the energy stored effectively and last but not least, they mustn’t be bulky. else, it will defeat part of the purposed of the solar-powered tents. it would be funny, to be lugging around huge bulky storage cells, instead of batteries or fuel. don’t you think so?

NOW READ  Practical Reasons Why You might Want To Go Solar