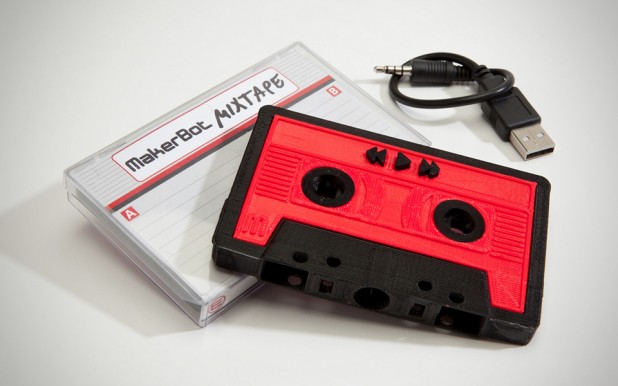 long before the digital music revolution, we have mixtape which we curate our favorite tunes from various sources, including other tapes, vinyls and even the radio, and compiled them into a cassette tape. it was a long, tedious process that involves an audio system that has a double deck cassette tape player and lots of button pushing. digitizing has made consolidating our favorite songs a whole lot easier but in the process, the magic of a mixtape was lost. playlist on iTunes is cool but it is never the same without a tape. the MakerBot Mixtape aims to bring back some of those magic. styled in an old fashion cassette tape, this MP3 player features a standard headphone jack, a built-in rechargeable lithium-ion battery for up to four hours of playback, 2GB of storage for your desired songs, and three buttons with five functions, including play/pause, skip forward, skip backward, equalizer and reset. it comes with a USB cable for hooking up with your computer, allowing you to drag and drop your music files into it and recharges its internal battery at the same time. it is totally plug-and-play, so no fancy software to fiddle with or whatsoever and it will appear as an external drive when plugged into your computer. which also means, you can use it as a medium to store and transfer your other digital contents too. available in two versions: MakerBot Mixtape Kit ($25) for those with MakerBot and MakerBot Mixtape ($39) for those without. without doubt, this is a perfect gift for your love ones – beating CDs one up. take a few more look and enjoy a short product video after the break.