Consumer-grade drones are a dime a doze. It seems like everyone knows how to build one and sell it to you for a handsome amount. Most drones available today differentiate themselves with sophisticated software and sensors, but really, that is all there is to it. The drivetrain that makes them take flight is pretty much the same, comprising of, you know, brushless motors and rotors. While companies are cashing on this common technology, design engineer Edgar Herrera decided to challenge the status quo. And what he has proposed is, imho, a slap on capitalist businesses who seek little to no innovations and taking the easy way out to milk the market. 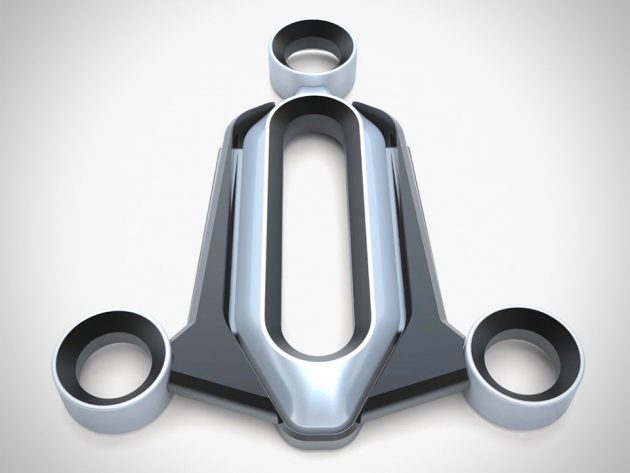 Herrera came up with the idea of a drone that does away with traditional exposed rotors or propellers. And so, yes, it is a bladeless drone. It is a bold proposition indeed. Put aside the workability, the idea of going blade-less will indeed eliminate at least one major problem that plague traditional propellers-driven drones: danger of high-speed spinning blades. He proposed the use of air ducts in place of rotors with the main central duct providing vertical take off and landing, while two forward air ducts and a rearward air duct offers directional control through 20 degrees of rotation front-to-back and clockwise or anti-clockwise, respectively. 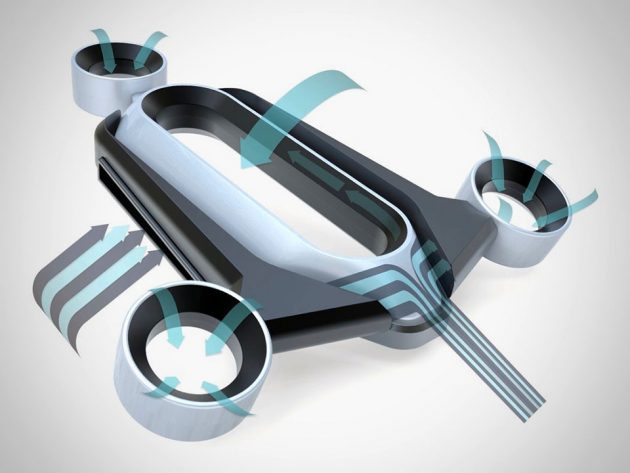 According to our source, air ducts will also minimize the noise generated. However, a look at Dyson blade-less fan, we’d say maybe not. That being said, Herrera’s bladeless drone concept is kind of like a bunch Dyson blade-less fans stuck together, lay flat and made to fly. As for the workability, I didn’t think it will work, at least not according to the principle of flight and probably not with the technology we have today. On contrary to some belief, drones do not achieved flight by pushing air downwards, that will be silly. Instead, Bernoulli’s theorem made it possible and hence the need for rotors to provide the planes or surfaces necessary for pressure differences in order for lift to occur. Rotors made it possible with minimum energy input too, well, mostly… 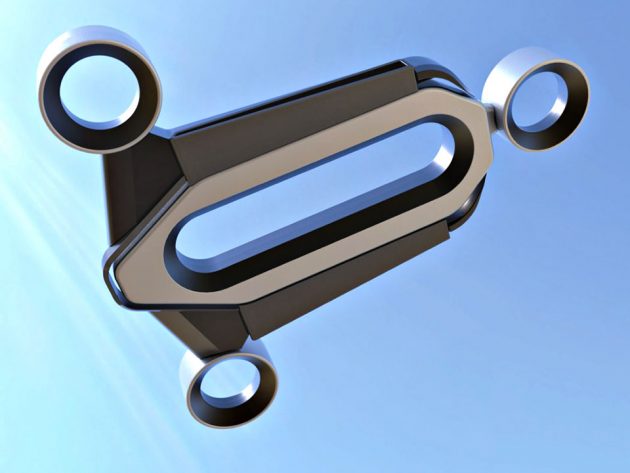 But if air ducts are to be use, you’d be requiring a hell lot of power to drive air to lift the vehicle off the ground and obviously, Bernoulli’s theorem won’t be offering any help in creating lift. It is not hard to imagine how counterproductive it is. Just imagine trying to lift yourself off the ground with a bunch of leaf blowers. Not that easy, right? Even if it does lift off the ground, it will be nothing more than a hovercraft that uses air as cushion, rather than actual flight. That’s not say it won’t get the altitude. It sure can, but like I say, energy required will be an issue. If you are able to solve the energy aspect, as well as the drive to provide that kind of brute thrust, then maybe, just maybe, it could work.

Anyways, putting my argument aside, one cannot deny that Edgar Herrera did a hell of a job with the proposed design. It looks suitably futuristic and it could very be the future of drone design. The only thing left to do is develop an energy efficient propulsion system to make it happen. Speaking of which, Herrera seems to have a solution. The output of each air duct is dependent on the headwind hitting on the drone. However, while on the ground, the air ducts will have to work at their maximum capacity to draw air from the intakes located on the sides and top of the drone to take it up into the air and accelerate it forward. After which, it will leverage on the headwind from the forward flight to regulate the air ducts so it can save energy as it continues forth. At least that’s how it is supposed to work on paper. How well this concept works remain to be seen.

Apparently, Herrera did took this concept to Indiegogo, but for some reasons unknown to us, it was pulled. You can’t even find the page anymore. Btw, I am not dismissing that this is an impossible endeavor. Like I said, it could work but only if an energy efficient air multiplier system can be developed. Also, in reality, it is not going to be quiet. I mean, seriously, internal impellers of sort will have to be used to draw air and so, it will create quite a ding, if not more noisy. However, at the bottom of my heart, I hope someone will develop the technology to make it happen because Herrera Blade-less Fan looks ridiculously sleek and crazy cool. And oh, did we mentioned that Edgar Herrera Bladeless Drone was a Red Dot Award 2016 winner?