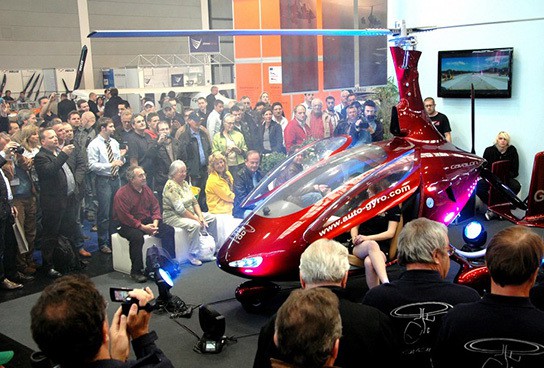 another exciting announcement for those who are rich enough for personal flight. i am talking about you being the pilot and not as a passenger. announced recently and showcased during the recent Aero Friedrichshafen 2011 is The Cavalon gyrocopter from Germany-based Auto-Gyro. for the uninitiated, the history of gyroplane dated back to 1923 when the father of gyroplane, Juan de la Cierva, flew his “auto-gyro” for the first time.
[ad#Google Adsense-text-468×60]

The Cavalon uses the same principle of the original gyroplane where the engine serves as the only drive for the push propeller while the rotor uses the air stream to set itself in rotation. the rotation of the unpowered rotor is termed as ‘autorotation’ which is what keeps a gyrocopter (or gyroplane) afloat in the air. it is an age old concept but if you ask me, i will say it is simple and yet superbly awesome in every way.

The Cavalon can be yours for €65,000 (about US$94,340). as with anything that flies, this machine requires certification and in this respect, Auto-Gyro will assist with the certification documentation necessary for each country. there are ten of such unit up for grabs from this year’s production run. so better hurry if you want one.