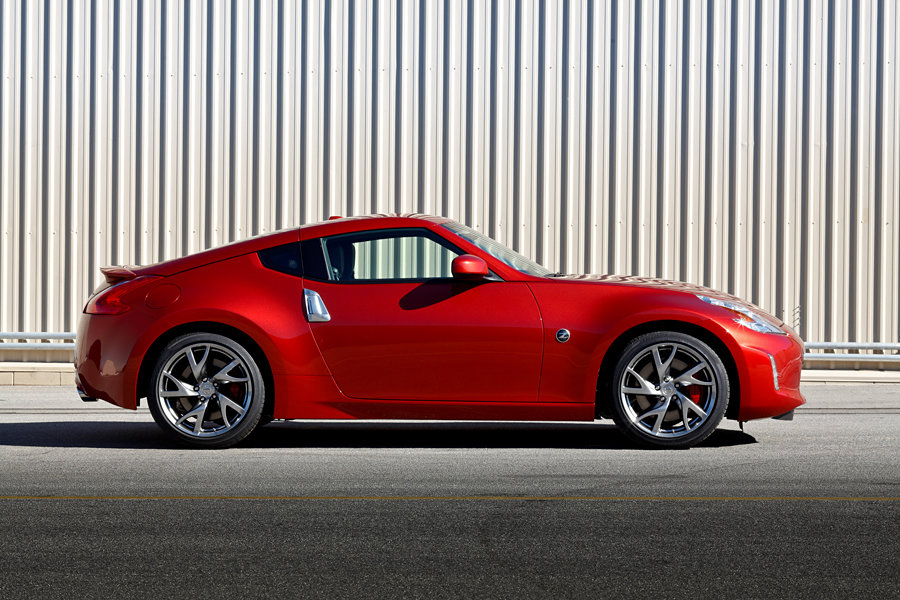 ever since the Z car takes on the V engine, it has lost and gain some fans, and if you belongs to the latter category, then you will be glad that this legendary roadster will be receiving a much needed facelift, dubbed as the 2013 Nissan 370Z. again, the Z car will be available in coupe, roadster and NISMO Z models. some of the updates include a refreshed front fascia integrated with vertical LED daytime running lights, red reflector for rear fascia, new 18-inch rolling stocks, dark-finish fuel gauge trim, and two newly added colorway: Magma Red and Midnight Blue. the Sport Package equipped models will receive a larger 19-inch aluminum-alloy wheels, red-finished brake calipers, as well as Euro-tuned shock absorbers. strangely, the NISMO 370Z will omit the new front fascia and red reflector change but it will come with a new Bose Premium Audio Package, complete with two additional speakers and two subwoofers. other updates for the NISMO model include gun metallic dark-finish 19-inch wheels, and Nissan GT-R style high-rigidity brake hoses and performance brake fluid.

expect the 2013 370Z Coupe and the Coupe Touring model to be equipped the 332 horsepower 3.7-liter DOHC V6 engine mated to a choice of either six-speed manual gearbox or a seven-speed automatic transmission. the Roadster and the Roadster Touring will be equipped with the same engine but only the Touring model gets a choice between the six-speed manual and seven-speed auto. the Roadster will only be available with seven-speed auto transmission. the top-ranging NISMO model will be fitted with a 3.7-liter DOHC V6 engine that puts out 350 horses and 276 lb-ft, thanks to its exclusive H-configured exhaust system, tuned muffler and an optimized ECM control. other features of the NISMO model include close-ratio six-speed manual gearbox with standard SyncroRev Match, a specially tuned suspension, super-lightweight rollers, and a race-inspired exterior and interior styling. expect the new 2013 Nissan 370Z to hit your dealers this June with yet to be determined prices. hit the jump for a cool gallery of the 2013 Nissan 350Z.