what better way to celebrate the silverscreen’s ginormous monster 60 year-old birthday then to grab yourself a Godzilla figure cast in solid gold? well… that’s if you are so huge a fan and has pots of gold lying around because this 33 lbs precious statue will set you back at a super cool $1.5 million (150 million Yen). then again, we shouldn’t be so surprised when it is sculpted in 24-Karat gold by Japanese jeweler, Ginza Tanaka (the same folks who sculpted Leo Messi’s The Golden Foot, remember?). at this amount of insane proportion, you deserved to be served with more details before dropping a fortune for it. this golden sculpture is based on the prototype of Godzilla “Biollante” model from the 1989 movie Godzilla vs Biollante with some tweaks to the creature’s muscles to create a more “powerful look”.

the overall finish is semi-gloss, with the exception of the edges on the claws, fangs, and fins, which are treated with glossy finish. the 24-Karat Solid Gold Godzilla Figure By Ginza Tanaka will be on sales at nine Ginza Tanaka stores across Japan starting from July 20, ahead of the Gareth Edwards’ Godzilla nationwide screening in Japan on July 25, 2014. for those who just want to have a look at this expensive monstrosity, you can catch the golden monster on display at Revealed G Expo Godzilla Tokyo (July 20-29), at Gina Tanaka in Ginza (July 30-August 10) and at Reveal G Expo Godzilla Osaka (August 14-24). check out this link for more details (note: it will help if you know some Japanese language cos’ Google Translate has its limitation). 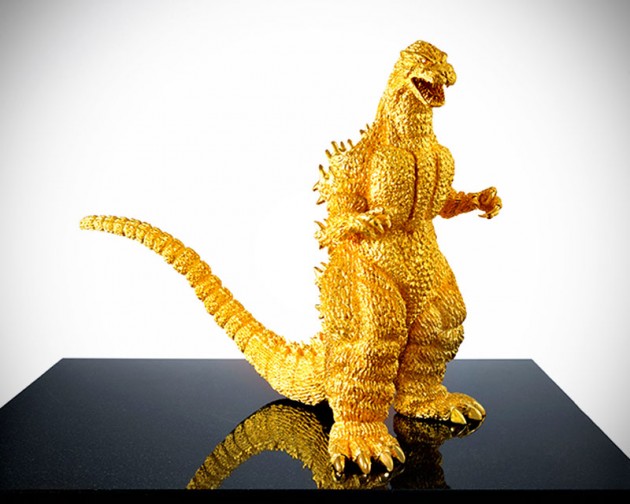