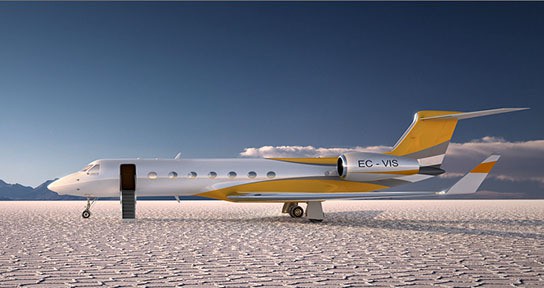 we have seen iPad being integrated into yacht and automobile, but one integrated with an aircraft? it gotta be the first. seriously, do you trust an iPad-controlled aircraft? for me, it’s a yes as long it doesn’t fiddles with the flight control. conceived up by Spain-based industrial designer Stefan Radev, this reportedly $60 million Gulfstream G550 concept had a makeover that ranges from the exterior livery to the luxurious interior design. Stefan Radev called it the Visions Edition.
[ad#Google Adsense-text-468×60]

the large oval windows are a trademark of Gulfstream aircraft, which also allows more natural lighting into the cabin. premium luxury is the name of the game here and therefore, it will be the standard for throughout the interior of the aircraft. the exterior is limited to livery design, hence, you would expect no less than luxury and quality for the interior. Radev also added a little to the sustainability into the design by using bamboo for its wood element in the interior.

of course, iPod, iPhone or iPad is used to control the cabin environment or for the more obvious job of entertainment. thank goodness that flying isn’t one of them. i cannot imagine if one try use the accelerometer and gyroscope features of the iDevices to pilot something 40,000 feet in the air. that would be like signing a death warrant.