We are familiar with what drones can do. It can do aerial imaging, topography surveillance, building inspection, and even delivery of critical cargo like kidneys, and now, it is being used as an alternative to the dangerous job of skyscraper window-washing. At least, it is in Latvia where a company called Aerones is pioneering tall building washing using custom built, giant-ass drones. And how big are we talking about? Well, we are looking at about three-freaking-meter (nearly 10 feet!) in width – which is likely the largest drone outside of the military. 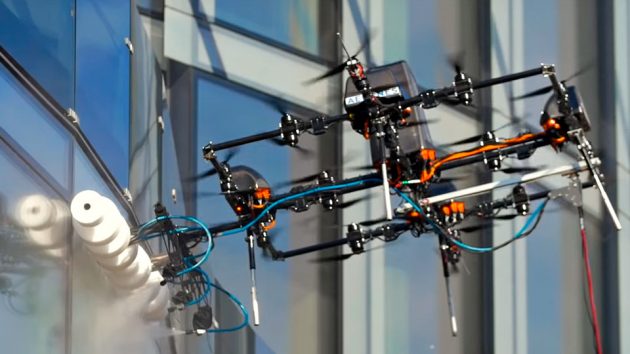 This purposed design drone is powered by 12 motors and it is outfitted with hoses and sponge rollers (that serve as a safety buffer between the drone and the building), along with cameras, to enable a ground-based crew to oversee the washing process. Apparently, with Aerones Window-washing Drone, it can get the job done “20 times faster” than human window washers and without putting human lives on the line. The caveat is, water don’t magically appear on the drone and as such, it is tethered with a hose that feeds the water from a tank below, plus there is another cable to provides the electricity required to power the drone and the onboard equipment.

Because of the tethers, Aerones Window-washing Drone is limited to cleaning skyscrapers of height no more than 350 meters (1,150 feet). At least, it is for now until further development materializes. While the use of drones to clean windows eliminate the need to put human at risk, it poses another risk: what if the drone fail and fall out of the sky? Thankfully, Aerones have thought this out. Apparently, it has a safety cable that secures to the top of the building that will prevent it from plunging to its demise in the event all rotors fail.

However, in a video put out by the company to demonstrate the capability of this window-washing drone, we do see any safety line. Window-washing is not the only job Aerones want drones to do; it also has specialized drones that are designed to clean wind turbines, as well as fire fighting drones. Keep going to catch the aforementioned video.