Prior to 2017, the phase ‘alternative fact’ was non-existence, but you all know how it got popularized and obviously, we are not going to get involved in this political shenanigans going on right now. However, not everyone is going to standby and watch some folk proclaim alternative facts and not express anything. Vintage Industrial, the purveyor of retro industrial furniture, is one of those voices and being a furniture company, it chose to weigh in on “alternative fact” with its own alternative set of facts: a desk can defy gravity and stands on just one leg. 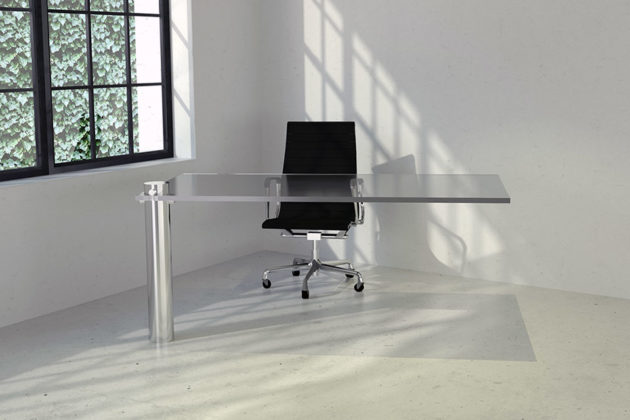 The outfit described the Alternative Fact Desk, as it is literally called, as a fitting furniture “to the new reality with its ability to be a desk or table” (despite having just one leg). “We wanted a design to reflect on the current state of things in the U.S.,” said Greg Hankerson, co-founder of Vintage Industrial. “The Alternative Fact desk really works for this simple reason. If someone says it’s a desk you present them with the alternative fact that it is a table and vice versa. If they say it can’t work due to gravity, you tell them gravity is an alternative fact.”

Well, what can we say? That sure sounds like a fair statement and besides, as it turns out, it actually works. That said, it is only right that we furnish you with details about this convention-challenging table. The desk features a single highly-polished base that holds up a 60 x 36 class top “for transparency” (ha! I see what you did there!), held in place with recycled elephant ivory pins and it is actually for sale, priced at a mind-bending $12,997.99 for the base model. Last checked, the table is not officially listed on the company’s website, but if you really want it, we suggest you touch base with Vintage Industrial via the official web page or Facebook page.