we are all familiar with smartphones. now imagine a smartphone squeezed into a flat, black box with no display and no buttons, now that’s essentially what the Amazon Fire TV is. set top is not the newest thing on planet earth, but the Amazon Fire TV wants to expand your couch potato universe further by letting you play popular games on it with an optional proper game controller with a la-Xbox controller design, but with familiar Android controls as well as media buttons along the edge. and we heard big names in the gaming industry are in it too, such as Minecraft. anyway, as for being a streaming media player, it streams 1080p and offers access to big entertainment channels like Netflix, Amazon Prime Instant Video, Showtime, Hulu Plus and more. 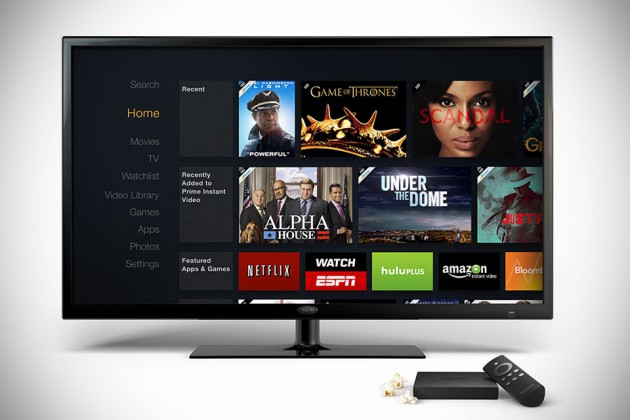 the device is powered by a Qualcomm Snapdragon 8064 quad-core CPU with 2GB of RAM and has 8GB of internal storage, along with hard specs like dual-band, dual-antenna WiFi, Bluetooth 4.0, and a decent selection of ports comprising of HDMI 1.4b, optical audio, Ethernet port, as well as a USB 2.0 port. output resolution is naturally 1080p, up to 60 fps and audio supported includes Dolby Digital Plus, 5.1 surround sound, stereo and HDMI audio pass through up to 7.1. Fire TV runs off Android-based Fire OS “Mojito” which means it should be fairly simple for developers to port their services and games over to Fire TV. last but not the least, the accompanying sleek remote control has a built-in microphone to enable voice search to find movies, TV shows and more, as oppose to the dreadful onscreen keyboard or QWERTY-equipped remote. the Amazon Fire TV is available starting today for just 99 bucks a pop.