if you are a hardcore PC gamer, chances are you’d built your own rig and has serious lust for both processing and graphics power. while processing power has been addressed and pretty much fixed at this point, it is the graphics card that is going to determine if you are going to play games in maximum possible setting to satisfy your need for insane graphics details. speaking of which, the AMD Radeon R9 295X2 Graphics Card is the new kid in town that’s claiming the world’s fastest video card title (for now) and it has a cool 11.5 Teraflops to account for that speed claim, backed by 8GB of GDDR5 video memory and a dual 512-bit memory bus – all rigged to an Asetek-supplied liquid cooling solution to keep the heat down. 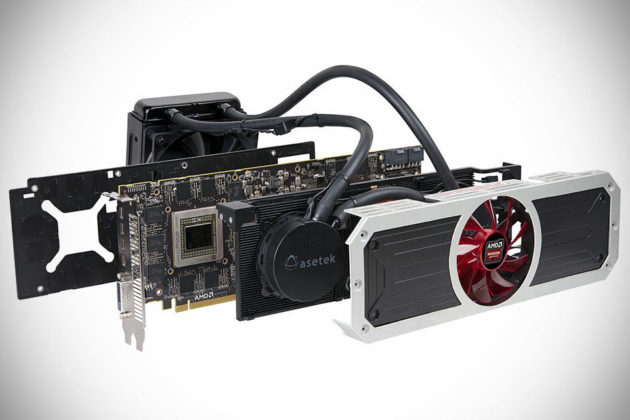 packing two R9 series GPUs into a single card design, the R9 295X2 is boldly described by AMD as a graphics card that “manhandles today’s and tomorrow’s games in maximum settings at 4K resolution.” not that there are many 4K games around to take advantage of its awesome capability, but you’d be future-proofing your rig. the AMD Radeon R9 295X2 Graphics Card is slated to hit the shelves later this month for a mere $1,499, which is a “bargain” considering it is half the price of the recently-announced $3K GeForce GTX Titan Z that has “only” 8 Teraflops to shout about. though, it is noteworthy that the R9 295X2 is not an electricity sipper like the Titan Z is or claims to be; it is one hungry video card to chomp up 500 watts, which means you will need a very able power supply to deal with it. don’t miss a hilarious official product video after the fold.