once every few years, German industrial control and automation company Festo will unveil an amazing animal inspired robot. the last we have seen dates back to 2011 where we were awed by the incredible life-like seagull and this time round, the Esslingen am Neckar-based firm gets back to the ground and came up with another recognizable robot – the BionicKangaroo. unlike the frictional six million dollar man, this roo is not part kangaroo, part robot; it is a fully robotized version of the iconic animal native to Australia. this mechanical, or should we say bionic, marsupial is able to transverse quickly and efficiently like its real life counterpart and it has Achilles tendon in the form of elastic spring element that stores energy upon landing, ready for the succeeding jump, while electric servomotors-controlled tail helps in balancing the bionic creature as it leaps a foot and half into the air and lands surefooted like the real thing. 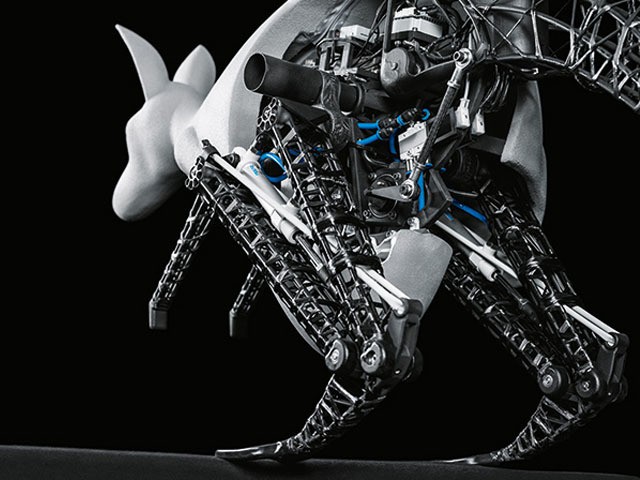 upon landing, the spring recaptures some of the energy to be used for the next jump and as such, it helps in prolonging the bionic Joey’s rechargeable batteries, thus enables it to go further. it won’t go on hopping forever, but it would certainly extend the range if it could go autonomous. speaking of which, it is not autonomous as most robotic developments we see today. from the product demo video, we briefly see MYO Gesture Control Armband being used to control the kangaroo, but it is nevertheless a good start. the BionicKangaroo’s jumps are actuated by pneumatic cylinders on the legs with air supplied by an onboard air-compressor, or fed by a high-pressure storage tank. orchestrating the clockwork that makes this roo ticks is an off-the-shelf PLC that keep tracks of the balance while minding the pneumatic cylinders and electric tail motors.

kangaroos are creatures tailor-made for navigating through most harsh terrains, which makes this development quite an exciting one as future autonomous vehicles could employ similar technologies to conquer rugged terrains for say, search and rescue operations into areas where wheeled, or even tracked vehicle can’t access. though the BionicKangaroo is not perfect yet; as graceful as it might appears to be, it is still not as agile like the real deal cos’ it appears to be ‘borderline wobbly’ at some point. next, we think it should be given the ability to recover itself from a fall just like the real creature does. no? scroll down for a video to see the BionicKangaroo in action.

Festo via Hack A Day