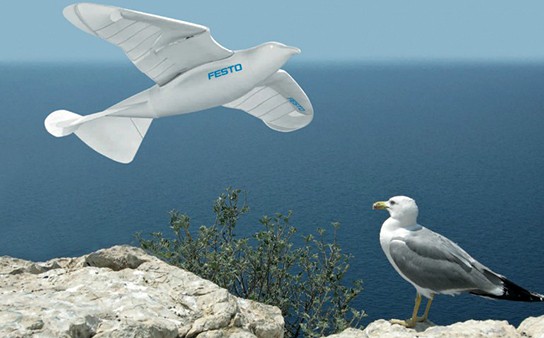 now, it is not only hummingbird that we must be aware of. the next seagull you spot could be a flying robot. the upside is, it won’t poop on you indiscriminately or a take a bite off the food from your picnic basket, but the downer is, it could be spying on you. Festo has just unveiled the next generation of flight, dubbed the Smart Bird, which mimics a real flying seagull. you won’t believe how real it is to the real seagull. check out the video clip after the break to witness it for yourself. constructed out of ultra-light weight materials such as carbon fiber and sensitive control electronics, this piece of magnificently engineered bird weighs in at just 450 grams. strictly speaking, it weighs much lesser than your iPad 2.
[ad#Google Adsense-text-468×60] there’s no propulsion system on the Smart Bird which relies solely on its wings to take flight. one shouldn’t confuse the Smart Bird with an ornithopter that flaps its wings profusely to maintain flight. the Smart Bird is much more than just flapping its wings. the Smart Bird controls itself by twisting its body, wings, head and tails. it is also not inspired by a biological system but rather it is one that mimics what the biological system does. which is what makes it awesomely amazing. Festo is, of course, brimming with pride, now that they have decipher the flight of birds. the Smart Bird is totally capable of autonomous take-off, flight and landing with its wings.

the Smart Bird brings a whole new meaning to covert surveillance. nobody will suspect these avian creatures would be spying on them, unless, of course, these gulls stray too far inland to be worthy of the suspicious. for in this case, probably the hummingbird would be a more ideal candidate. either way, it still creeps us out.