Apparently, each year, the number of cigarette butts discarded onto the streets of the Netherlands outnumbered the population of the country by over 350 times and as you might have imagined, to clean up the astronomical number of cigarette butts would be an insurmountable task. What’s more is, you can’t just leave them be because, according a Netherlands startup, it will take up to 12 years for the used filters to decompose. Whoa. I never knew that!

I am going to be honest here. I saw discarded cigarettes filter on the streets before, but most of time, the state when I saw them, they were already pretty disintegrated and so, I would imagine it probably don’t take that long to sort of ‘biodegrade’. Then again, weather does play a part. Shit load of rain and harsh sunshine helps to break down this byproduct of one of humans’ many fifty habits. While the rest of the world are putting up with this pollution of epidemic proportion, a Netherlands startup Crowded Cities is not going to stand by and watch they beloved country covered in butts.

The young company wants to rid the streets of butts by turning to crows for help. Yes. Crows. The annoying, scavenging but super smart avian creatures that are at this very moment, bickering outside my windows as I am writing this article. Arghhh… boy, aren’t they a nuisance! Anywho, the Dutch company has developed a device called CrowBar that will aid in training crows to collect discarded cigarettes. The device is actually based on the concept first created by an American inventor that aims to instill the notion of exchanging something for treats. 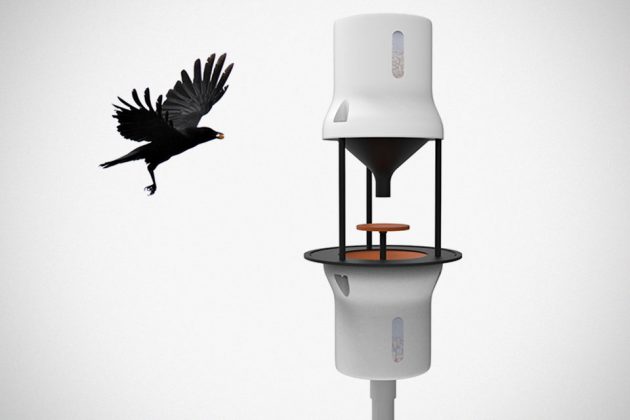 The treats in this case would be peanuts and the ‘something’ would be the discarded cigarettes. Crowbar comprises of a large funnel for cigarette filters deposit, a camera for identifying the deposited item and a dispenser to ‘issue’ peanuts. When a crow drops a butt into the device, peanuts will be dispense as a reward. But it won’t happen overnight. The crows in the wild need to be trained and that’s a 4-step plan comes in. First, the machine will offer peanuts next to a cigarette butt. This will teach the bird that this machine is the place where food can be found.

When the first step has been conditioned into the birds, the machine will only dispense the food when the crow arrive at the machine. This part is where the crow starts to learn to operated the CrowBar. In the third step, the machine will not dispense any food automatically like it previously did. Instead, a cigarette butt will be on the tiny platform which will hopefully drive the bird into confusion and start pecking around to find ways to activate the machine for the treat.

All the pecking will hopefully lead the bird to accidentally push the butt into the funnel and when it does, the machine kicks in and releases some delicious peanuts. This step ingrains in the bird that butts into machine equals food. After this part is conditioned, the cigarette butt will be removed and a few of the filters will be scattered around the nearby area. If the training from the previous steps are effective, the crow will start picking up butts and dropping them into Crowbar in return for food and the training is complete, or at least, that’s the theory.

Hopefully, the one or few crow that took part in the training will go on and tell others about this new found food source. From the numerous study and videos posted online, we have no doubt that crows are super smart, but whether or not they social and share info like humans do are not clear. Hopefully, they do because the success of Crowded Cities’ endeavor depends on that. The more the crow shares, the quicker cigarette butts can be removed from the streets.

However, I do have a concern that leans towards Alfred Hitchcock horror story. What if the project was a success and eventually, the streets are rid of all cigarette filters. Will this super smart avian creature turned desperate for food that they’d start snatching cigarettes off people’s hands? Just a thought. But you know it may happen. In addition, the project is good only if the area has quite a number of crows. That said, based on my little experience, if there are presence of eagles, crows generally will stay away from the area. Or at least that appeared to be the case in my locality.