Truth be told that if you want some lightweight, off-road fun, there is a bountiful of sport vehicles to see to your dirt track adventures, but if Ariel is your cuppa, well, the good news is, soon you will be able to kick up some dust in off-beaten tracks too and Nomad is the ride to look out for next month. Slated to debut on January 9, the Nomad is the British automaker’s first off-road endeavor and as far as the sneak images are concerned, it is looking pretty stunning. Taking on an off-road buggy’s open wheel design, the sub-1,600-pound Ariel Nomad is said to be powered by a 2.4L four-pot Honda engine that’s good for around 200 horsepower, mated to a six-speed transmission and a mechanical limited-slip differential, making it kind of a thrilling off-road machine.

Beyond that, you can expect loads of off-road features like enhanced ground clearance, gumball tires, long-travel suspension and a complete roll cage for rollover protection. Buyers will be able to personalize their Nomad with their choice of colors for the wheels, frame, bonnet and engine cover and apparently, “more sophisticated setups on the mechanical aspect will be available as options too. No word on the pricing, but it will be just weeks from now, we will hear about the pricing anyways. Ariel will be filling out orders in January, with first deliveries by mid-2015. 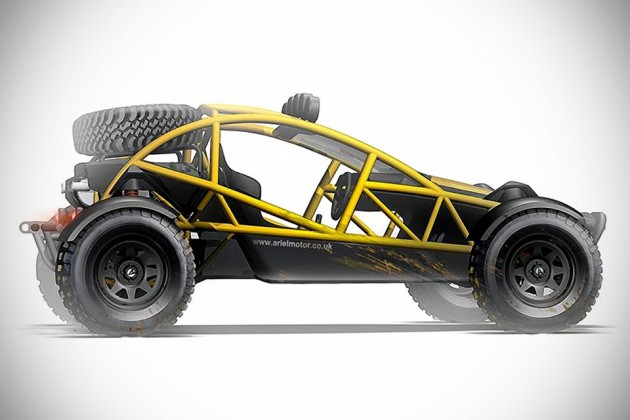 NOW READ  Ever Dreamed Of Taking Your Porsche 911 Into The Desert? Well, Now You Can!