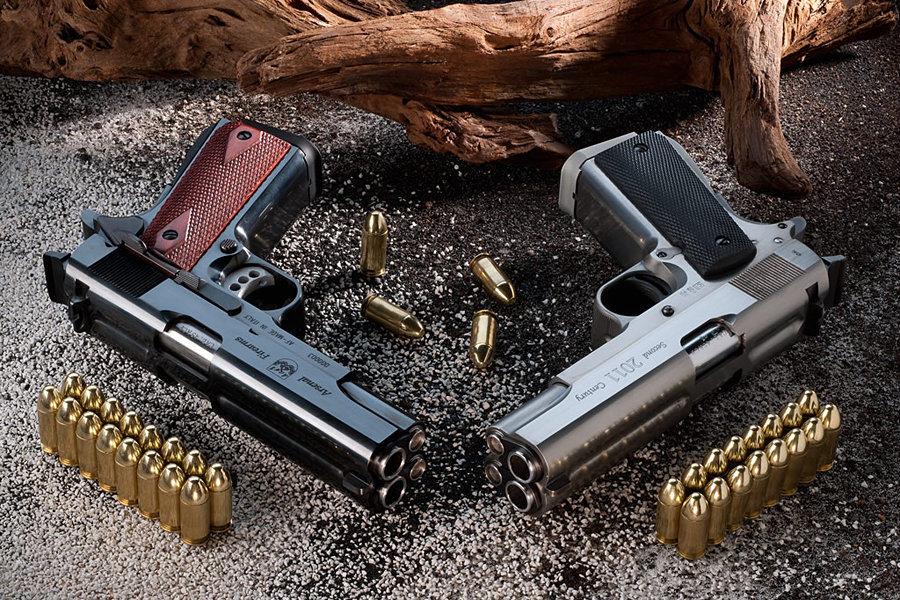 so you thought wielding a pair of pistols is cool? let us tell you what is really cool: wielding a lone pistol that has the power of two. meet the AF2011-A1 Double Barrel Pistol by Arsenal Firearms – a double barrel .45 caliber semiautomatic pistol that offers you twice the stopping power with a single squeeze of its trigger. in fact it is said that it could stop a bull with just one shot, erm, i mean a twin single shot – and it can unload all its 16 .45 caliber rounds into its target in around 3 seconds. built to commemorate the legendary Colt 1911-A1 in the Centenary, this twin barrel pistol boast an excellent grouping that enables all its 16 rounds to hit a target of the size of an orange at 15 yards or a watermelon at 25 yards. despite being designed with a slew of special custom parts to realize its double shot capability, most of its internal parts are interchangeable with the standard 1911 pistol. going the double barrel route doesn’t makes this pistol any less capable in term of magazine capacity as the AF2011-A1 uses a duplex, single column magazine that holds a total of 16 .45 caliber rounds. thus giving you the same number but deadlier shots. the downsides are, it doubles the load you need to lug along and of course, spending more dough on those rounds.

NOW READ  Laugo Arms Alien Pistol: There’s Nothing Alien About It, It Is Just Pistol Re-invented