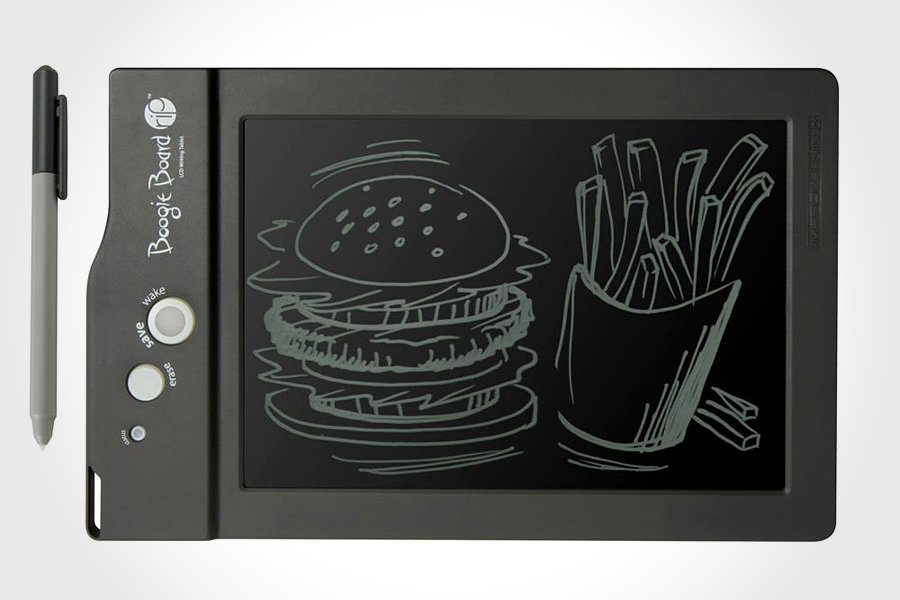 we were pretty doped when we saw the boogie board last year but laments the fact that it lacks the Save feature, which was a major drawback for such a great note-taking and doodle tablet. even though modestly priced, this single drawback was enough to stop us from putting down our money down for one. well… that was then. what the original Boogie Board lacks is now being made up for by the new Boogie Board Rip and as you might have guessed, the Rip now features a Save button that lets you save around 200 images on its 8MB onboard memory. these saved images can then be downloaded to your computer via the included USB cable, where user can edit them with using Adobe Illustrator or any similar application that can edit Vector PDF files. like its predecessor, the Rip also features one-touch erasing and pressure-sensitive LCD that allows user to create line of varying thicknesses. powered by a built-in rechargeable battery, the Rip has a 60 days standby time and up to 1-week of usage time. all told, the Boogie Board Rip is slightly beefier than its predecessor, measuring 7 x 11 x 0.5 inches (178 x 279 x 12.7 mm) and weighs in at 11.5 ounces (326 grams). though, it is worthy to note that partial or selective erasing is still not on the menu yet, which we certainly hope to see in the future iteration of this product. as for the price, the improved Boogie Board will set you back at $129.99 – which is three times more than its predecessor.