Since the demise of the world’s fastest commercial jet, Concorde, the world has been looking forward to a fastest way of traveling between continents. However, it is not until recent years that we see companies emerging to take on the challenge with some going to length to propose supercavitation submarine which could enable Shanghai-to-San Francisco travel in just 100 minutes and under-the-sea vacuum trains. While the latter two are more like future tech that will remain as theory for now, it is left to the aerospace industry to continue the legacy left behind by the Concorde. The latest to join the supersonic endeavor is a startup, Boom Technology. 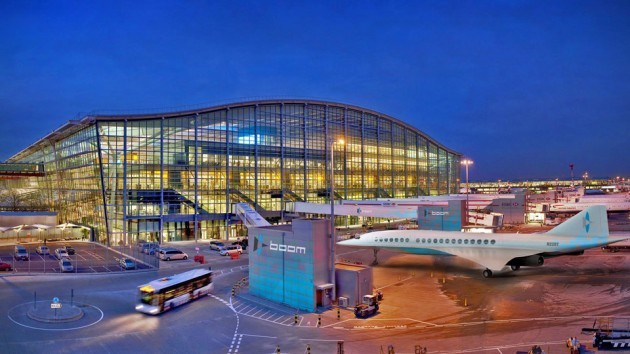 And mind you, Boom, while being a start-up, is not nobody. The Colorado-based aviation company is composed of talented personnel with combined experience from Amazon, Pratt & Whitney, Gulfstream, Boeing, Virgin Galactic, NASA, and even Lockheed Martin. What Boom proposed is not new, though; the outfit wants to build at jet that will travel at more than twice the speed of sound at Mach 2.2, or 1,451 miles-an-hour to be able to take you from London to New York in under 3.5 hours and at price point of Business Class ticket. Speaking of price point, Boom is expecting a round trip ticket to cost $5,000, which if realized, is certainly a dream come true.

The prospect is certainly exciting and so, it is little of a surprise that Boom’s proposal has kindled interest in Sir Richard Branson’s Virgin Group (Virgin America is on Boom’s advisory board, btw), as well as an unnamed European carrier. In fact, Virgin Group and the anonymous European carrier have reportedly optioned for 10 planes and 15 planes, respectively – with a total value of $5 billion. Though it is worthy to note that option, in this case, is not a confirmation of purchase, but is an expressed desire to acquire the supersonic aircraft if the project takes off.

Again, not surprisingly, Virgin Galactic will be involved the development too. According to a spokesperson from Virgin Group, The Spaceship Company, Virgin’s spaceship company that builds the Spaceship Two VSS Unity, will support Boom’s endeavor with “engineering, design and manufacturing services, flight tests and operations.” Work on the first prototype has already begun and if all’s on track, the world could be seeing supersonic commercial flight as soon as late 2017.