If there’s one thing motorcycle industry is need of, it would be a radical change in design. At this point, it seems like independent bike makers are the ones taking the lead to challenge the status quo in motorcycle design, but not established bike makers. It is strange phenomena, considering established bike manufacturers are the ones with the financial muscle. However, we may be seeing a shift here, starting with Italian motorcycle manufacturer MV Agusta upcoming two-wheeler, the F4Z, which will be officially unveil in September 4, 2016.

The F4Z is no ordinary bike, at least not in terms of aesthetic. While the name F4 does point to its lineage to the Varese-based outfit’s superbike series, the Z is secret recipe of the design and in this case, it was Zagato. The Italian coach builder are known more for turning out impressive four-wheeled concepts, but when it lends its creativity on a two-wheeler, the result is just as stunning. If you take the look at the F4 lineup, they look bold but, in all honesty, aren’t as groundbreaking. The Z touched model is a clear stand out not just among MV Agusta current and past lineups but also the industry as a whole. The F4Z is obviously a league on its own. 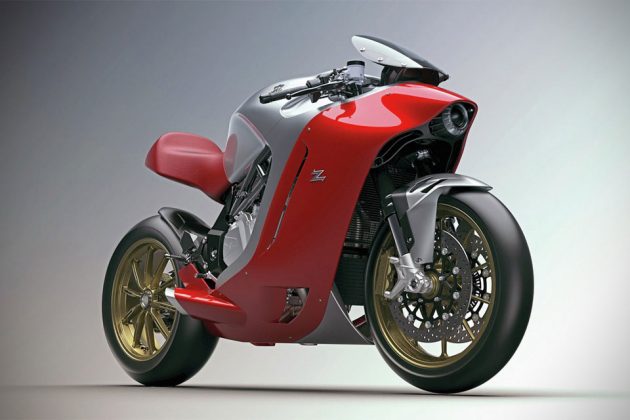 Featuring a super sleek line that boasts a flowing fairing that seem to merge with the fuel tank in one fell sweep. Even the exhaust on the right is integrated with the fairing. Finally, a single-pod projector headlight under the streamlined cowl that looks almost like a robot peeking out of a hooded coat and a what-looks-like a retractable windshield completes the look. The result is a bike that conveys a clean, uncluttered look – save for the occasional punctuation by a vent or two, and the exposed trellis frame and guts. It is futuristic in a way, at least part of it is, but still quite down-to-earth.

Beneath the Zagato-touched exterior, the mechanical side, including the motor, is likely to be the same as the current MV Agusta, or to be precise, the same as the current F4. More details will follow on September 4 when it is officially unveiled. In meantime, treat yourself to the official teaser video which you can find embedded below.

Source and images via Motoroids