So you think all pickup trucks are off-road capable? Well, a look at the Chevrolet Colorado ZR2 Concept Truck, you may think otherwise. We won’t blame you for having the sudden revelation that your Silverado is in fact not quite ready to take on the beaten paths. I can, for sure, but it won’t be as capable as what ZR2 has to offer. Based on the product Colorado Z71, the ZR2 is a good 4 inches wider and has the look that screams to keep on going even when the road ends. Though so, it doesn’t look all that out of this world, which is a good thing because you want this truck to be made and not one that’s destined for Chevy’s history book. 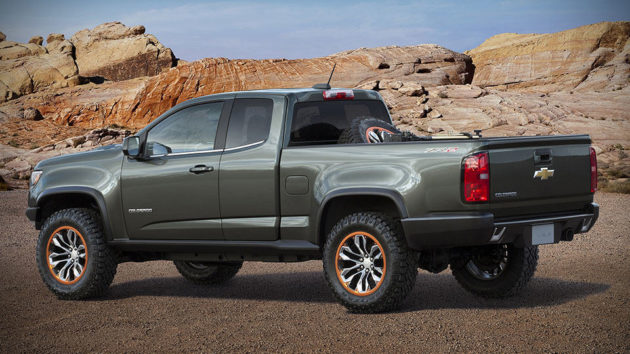 That said, It does get some nice revision to the front and rear fascia, upping its approach and departure angles, and an all-new grille, along with a bunch of made-for-off-road features including aluminum tow hooks, integrated winch, custom 18-inch bead-lock-style aluminum wheels wrapped in 275/65 R18 off-road tires, new front control arms, mono-tube coil-over shocks that boasts further suspension travel, electronic-locking front and rear differentials, and a generous two-inch lift and integral skid plates. The ride also gets new headlamp housings with blacked out accents, custom wheel flares cover, and a power dome-style hood which hides a new 2.8L Duramax diesel, pushing out 181 horses and 369 lb-ft of torque, which is mated to a six-speed automatic gearbox, driving the four-wheel drive system.

On the inside, it has a jet black leather interior with contrast orange stitching, embroidered ZR2 logos on front seat headrests, new instrument cluster display with inclinometer and ZR2 logos, and finally there is key bank for toggling the winch, as well as for the electronic front- and rear-locking differentials. The Chevrolet Colorado ZR2 Concept Truck made its debut at the 2014 Los Angeles Auto Show where Chevrolet will be gauging public’s interest. 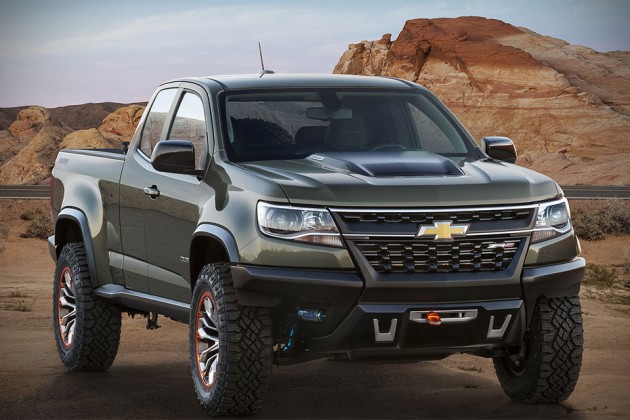