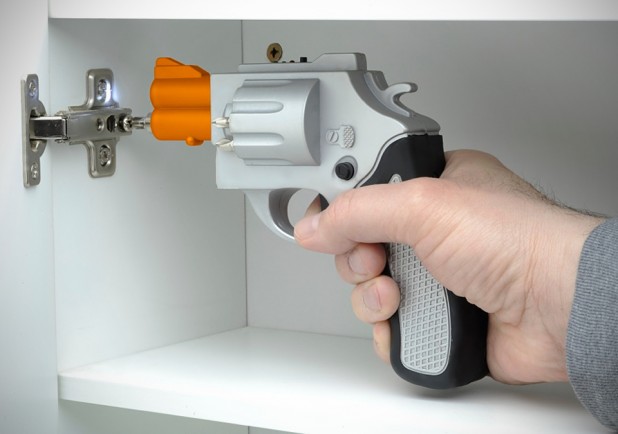 assuming that you are a home improvement Tim’s fan, then we suppose home improvement tools are a big part of your life against all your Mrs disapproval (what? don’t you already have a power screwdriver?). since you already at it, why not add the Drill Gun Power Screwdriver to your arsenal and spice things up a little? fashioned after a revolver pistol, it certainly looks nothing like a power screwdriver which probably will help you avert another nagging or questioning by your Mrs. the marvelous thing about this tool is, it is a very well thought out piece of equipment: it has an integrated LED light up where the gun barrel is and the revolver’s cylinder doubles as a holder for six screw bits. clever indeed but don’t ever wield this baby anywhere outside of your own domain because likely, the next think you will hear is police siren wailing and you know what’s going to happen after that, don’t you? oh, it is juiced by a rechargeable battery that provides a good 3 Nm of twisting power and spins it at 180 RPM. you can get this extra manly power screwdriver for an introductory price of $39.90 (usual $49.90) from Gadgets and Gear. hit the jump a few larger looks.