In a recent, somewhat viral video posted by YouTuber Milind Raj, it claimed that a multi-rotor drone was used to save a puppy in distress. According to Milind Raj, the puppy found itself stranded a dry part of a deep storm canal (which I can’t figured out where), but the helpless pup was saved by “quick thinking” engineer using a multicopter equipped with a “robotic claw.”

What’s even more interesting is, this isn’t just any robotic claw. It boasted that the drone is driven by “world class intelligent technology” that would ensure the safety of the pup. Meaning, you can pick it up and safely transport it without strangling it. It even goes as far as to say that it is capable monitoring the dog’s vital stats. Seriously? I have so many questions! 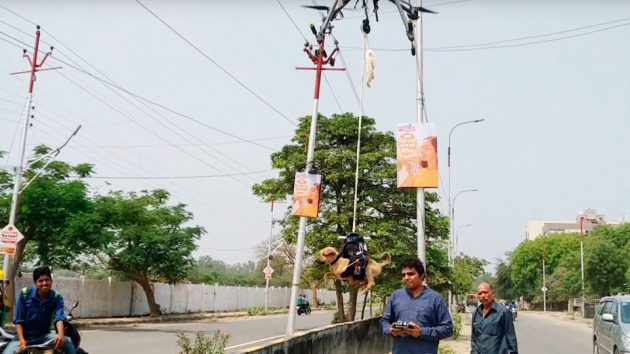 Anyways, what you are about to witness is basically a real-life claw machine in action, but with only one thing to grab and it was definitely less scammy than the claw machines in arcades. Though, we can say the same about the video. Jokes aside, the story goes that the drone with purported “patented” technology managed to pick up the little fido from the 20-foot storm drain. Well, to me, that’s just a regular harness and there was no claw or whatsoever seen.

That being said, how did the puppy got inside the harness? I am not going to lie. I do smell fish, especially when the video kicked off without showing how the little dog was secured. Plus, the release looks more like the harness slackening that allows the pup to walk away then the claimed “on-board intelligent computers trigger auto release once safe altitude is recorded.”

Now, now, here’s the thing: you don’t auto release at “safe altitude.” That thing there is a dog and not a bird. You only release it when it safely touches the ground. Granted, I do not discount the possibility of luggage barrier that result in misleading claims, but still I am all too curious about how did the pup get into the harness. Do not forget that that wasn’t a claw at all. Anyways, we shall leave to you be the judge on this. All I have to say is, I am skeptical.