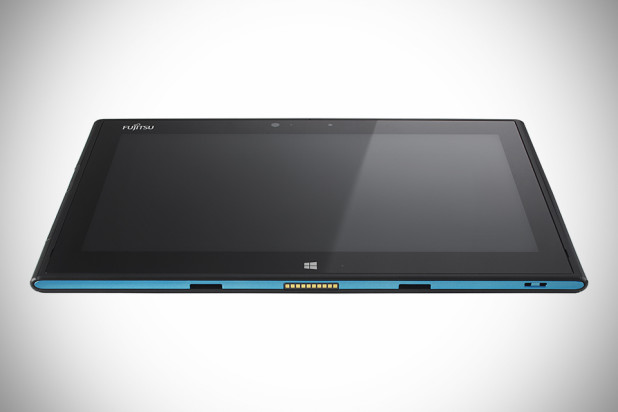 still having the Windows 8 fever and looking forward to the Windows 8 slate? well, here’s one stylish device you can look forward to: the Fujitsu STYLISTIC QH582 Windows 8 Tablet. beyond its pretty face, this made in Japan Windows tablet is rated IPX55/57/58 for water resistance and IP5X2 for dust-resistance, making it well suited for varied environment including field works and factories. despite its water- and dust-proof capabilities, the QH582 sport a pretty slim form factor which is tad under 10mm thin and weighs in at just 574 grams (1.27 pounds). its 10.1-inch IPS SuperFine HD LED Backlit multitouch display offers a wide viewing angle while being shield by a scratch resistant glass. equipped with a 1.8GHz Intel Atom Z2760 processor with 2GB of RAM, the QH582 features a 64GB of onboard storage, micro SD card slot, rotation lock button, two cameras: a 8.0-megapixel main shooter and a 720p HD front-facing camera; Bluetooth 4.0 and WiFi connectivity, Realtek HD audio codec, an “extensive battery lifespan” of up to ten and a half hours and the usual host of sensors including accelerometer gyroscope, e-compass as well as ambient light sensors. on the software aspect, the QH582 boost the Fujitsu proprietary ID Password Utility that manages all your access and logins with just one password and Ink2Go utility that facilities annotations to be recorded by writing and/or typing directly on the touchscreen and running applications. availability and pricing is yet to be confirmed at this point, though. you can learn more about the Fujitsu STYLISTIC QH582 Windows 8 Tablet HERE.

PS: we love the touch of blue there. sweet.