10 years ago, an unnamed fisherman in the Philippines dived into the water to dislodge a stuck anchor and subsequently returned to the surface with a shell which the anchor had apparently lodged on. The angler didn’t think of it much then and proceed to bring home the shell. All this while, he kept what he identified as a “good-luck charm” under his bed, until a blaze force him to vacate with the shell. Likely with the belief that the shell might be jinxed, he brought it to Puerto Princesa’s tourism office. It was only then, the revelation begins. 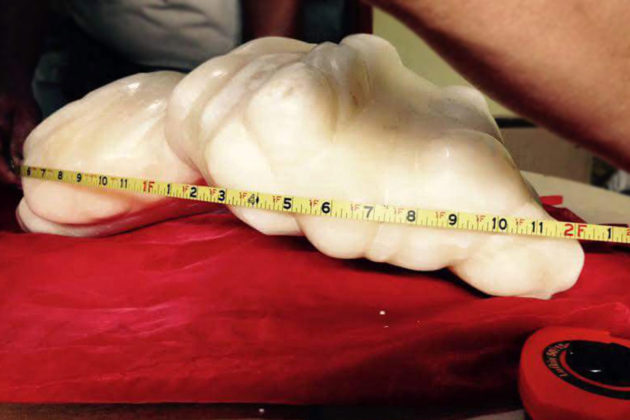 As it turns out, this “good luck charm” of his is actually a rock solid 75-pound pearl, measuring a cool 2.2 feet long and a foot wide. At this size, this enchanting calcium carbonate formed by a living shelled mollusk smashes the current record holder, which is a 14 lbs pearl found off Palawan in 1934 and said to be worth $35 million. The tourism official immediately called on experts to authenticate this rare find and it was estimated that the unnamed angler’s find is worth a stupendous $100 million! Damn, he is one lucky dude, ain’t he?

I guess the saying of every dog has its day is true and proven, and this is indeed Mr. Fisherman’s day. No words on how this lucky man plan on doing with his new found fortune, but one thing for sure, the tourism office in Puerto Princesa hopes to leverage on this finding to help boast the tourism in this area. I am sure with enough buzz, people from all over the world will be flocking to Puerto Princesa in hope to land on a huge-ass pearl themselves.

Though it is worthy to know that such huge pearl formed inside a giant clam is rare and unusual as clams are not known to produce pearls like its some shelled mollusk cousins. However, in case you believe lady luck is with you, the place you are going to head to is Palawan island.