for the longest time, sci-fi anime flicks like Akira has captured our imagination on the bikes of the future, but three decades on, these bikes of the future is still nowhere to be seen – until now, well… almost. the recently announced Honda NM4 Vultus motorcycle is probably the closest you can get to one as far as mainstream motorcycles are concerned. though exactly when or how much it will cost is yet to be announced. the NM4 looks like a mash up of a modern scooter and cruiser, and it is obviously not as low slung as you would expect of a future bike, you know, for practicality sake cos’ humps and undulating roads are still part and parcel of the roads of the present. 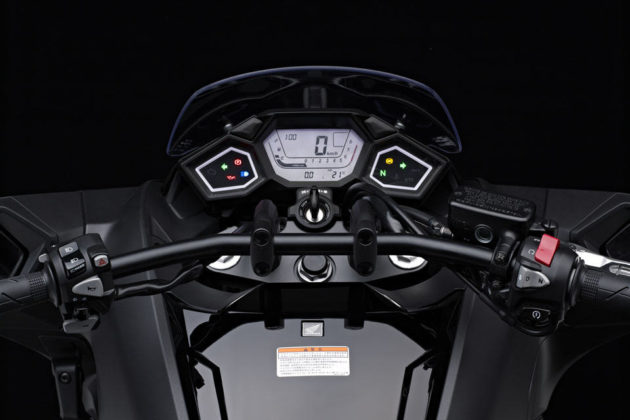 visually, it is quite a treat; it has long-ish, chiseled front-end that reminiscent of a Stealth Bomber, complete with seamlessly integrated side mirrors, windshield, concealed storage compartments and LED lightings. the flow continues to the midsection where everything is concealed with only a slight hint of the engine peeking out and atop, there’s a sculptured rider seat which continues back to a raised pillion seat that flips up to double as the rider’s backrest if desired. visually, it is not that futuristic as we have anticipated but it is a huge break in the tradition of bike design nonetheless. power comes from a liquid-cooled 745cc four-stroke, two-cylinder unit, producing 54 hp and 68 Nm of torque, while a 6-speed dual-clutch transmission (DCT) is responsible for putting the power to good use at the rear wheel. the DCT offers two modes of operations: an automatic twist-and-go D and S mode, and a trigger-operated, computer game-style manual MT model for times when you prefer the thrill of manual control.

other technical details include 43mm telescopic folks with 125mm stroke, rear monoshock with 100mm travel, lightweight aluminum swingarm, 320mm wavy disc and two-pod brake caliper up front, 240mm wavy disc and single-pod brake caliper at the rear, 2-channel ABS, plus 10-spoke cast aluminum wheels – 18 front and 17 rear – wrapped in 120/70 ZR18 and 200/50 ZR17 tires, respectively. as mentioned, no word on the pricing and/or the availability at this point, but we do have some pretty images for your consumption which you can find after the fold.