if you are a dog owner, you probably know that your canine friend needs exercise too and that exercise usually involves a lovely game of fetch, which admittedly, can be quite tiring when your dog is like a Bolt-wannabe and always come back to you with the stick or ball a little too fast. this is where iFetch can help to relieve you of the ‘chore’, or in a more positive perspective, teaches your dog to be independent of you when it comes to play time (actually not quite, cos’ iFetch recommends owner supervision). the iFetch is basically a clone of your arm (sort of…) that, unlike the myriad of tennis ball launcher in the market, actually throws the ball and at a variable distance, so in essence, it will feel more ‘human-like’. to get started, just powered up this gadget-for-dogs by plugging it to a wall outlet and drop the included ball (three balls are supplied with the device), or any ball of about 40mm or 1 1/2″ in diameter, into the funnel and iFetch will spit out the ball dutifully. 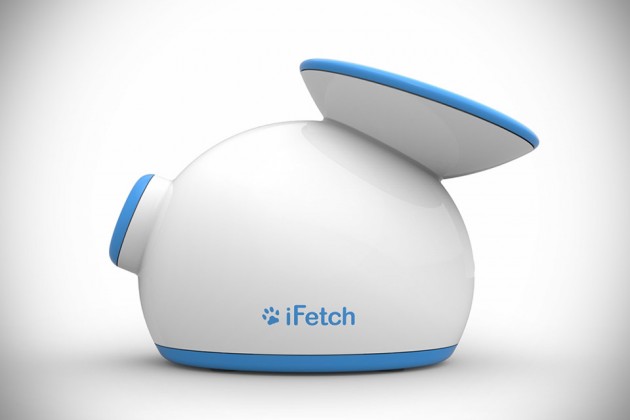 dropping ball is effortless, which you can do it or you can train your dog to do it. though its inventor noted that some dogs are quite a slobber, which means the balls will need to be cleaned often during the whole fetch process. the fact that it uses smaller balls (about a good 25-28mm smaller then a regulation size tennis ball) means that smaller canines can also enjoy a game of fetch without causing injury to their jaws. if you missed the boat when it went up on Kickstarter last year, the good news is, it is now available for $99.95 a pop. each iFetch comes supplied with three balls, but if you need more, you can acquire additional balls at $10 for a pack of five.