2016 marks the 75th years of Captain America, one of Marvel’s earliest superhero who clearly stood the test of time. Given Cap’s embodiment of American spirit and patriotism, it is only natural that Marvel will want to celebrate this occasion and it did so with this imposing 13-foot bronze tribute statue created by the Marvel Creative Team in association with Comicave Studios. The statue was first unveiled at this year’s SDCC and subsequently, in a Captain America anniversary ceremony on August 10, 2016, held at Prospect Park in Brooklyn, NY.

“He (Captain America) stands for something, something quintessentially New York; the never say die spirit” said Alex Alonso, Editor-In-Chief Marvel Comics, adding that “He was created during war time by Jack Kirby and Joe Simon. He was meant to represent the very best about the America and he stood the test of time.”

The event at Prospect Park was officiated by Eric Adams, Borough President of Brooklyn, who described Captain America as “the ultimate global icon for freedom, strength and doing the right thing.” He even declares that this day to be the Marvel Captain America Day in Brooklyn, USA.

The whole event made it sounds like Steve Rogers was a real person. Though I get the significance of Captain America to the American population and pop culture as a whole, but the statue and the celebratory mood sure blurs the line between fiction and reality. I mean, typically, commemorative statues are of famous people who have or had actually contributed to the society, but here we are celebrating the birthday of a person who only exists in the fictional world. Hell, it wasn’t even his birth year to start with; it was the birth of character who was already grown man in March 1941. 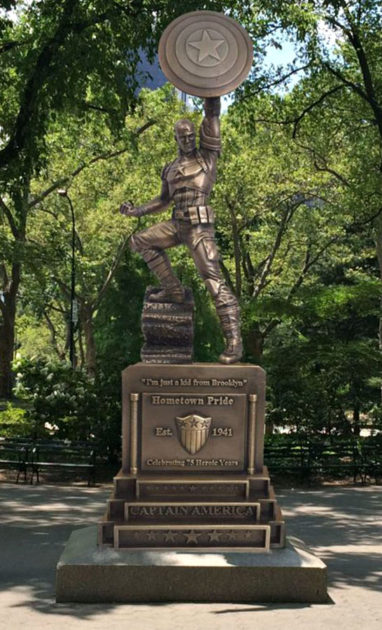 Not that I am opposing to this celebration; not even close. In fact, I thought the event was great, the bronze sculpture is awesome and all that, but I marvel at how Marvel Comics had managed to put them together like as if it is a real thing. Though I can’t argue with what Alex and Eric words. Those are ideals which Americans have strived for and looking at the political situation right now, those ideas could be what the country need to be reminded of.

For two weeks, the Captain America 75th anniversary bronze statue stood firm in Prospect Park and it has now moved to Barclays Center on Atlantic Avenue, which it will be there the whole of September before moving to the atrium of the soon-to-be opened “Beyond” flagship location in Industry City where it will spend rest of the year there.

A side thought though; if this statue were to be a permanent thing somewhere, will the generations in far future think Steve Rogers was an actual hero? Just wondering…

In a separate news… fans will be elated to know that they can bring home this statue, albeit in a more handy size. Comicave Studio, who helped crafted the life-size example, is offering the Captain America 75th Anniversary Bronze Statue in 1/12 for $450 a pop. There’s also a larger, pewter variety, the 1/4 Captain America Pewter Statue going for a cool $4,000. If you are eyeing on the 1/12 bronze replica, you have to know that it will not be there forever as it is limited to 750 pieces worldwide and the pewter replica, which is made-to-order, is limited to just 100 pieces worldwide. 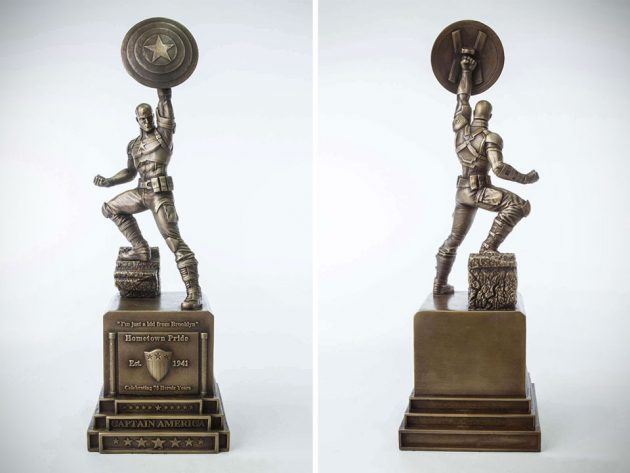 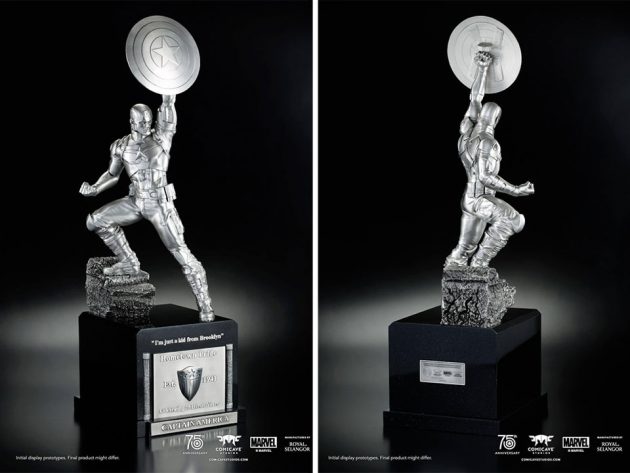