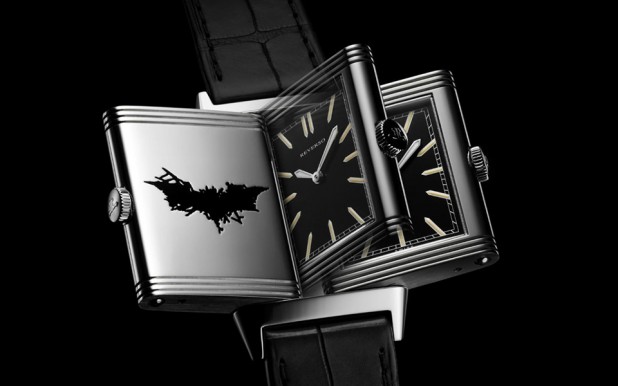 well, what do you know? Omega Seamaster is not the only watch that has been a staple in a movie franchise (that’s James Bond, if you haven’t had a clue). it turns out that Jaeger-LeCoultre Reverso (the Grande Reverso Taille, to be exact) has also graced the silver screen seventeen years ago in Joel Schumacher’s Batman Forever as billionaire industrialist Bruce Wayne’s time piece and has continued to do so in Christopher Nola’s Batman trilogy. this year, marking the epic conclusion of the Nolan’s trilogy The Dark Knight Rises, Jaeger-LeCoultre is releasing a special edition Grande Reverso Ultra Thin Tribute to 1931 time piece. similar to the watch Christian Bale (as Bruce Wayne, of course) wore in the last and final installment of the trilogy, this special edition watch is engraved and lacquered with The Dark Knight Rises logo on its caseback, which is only visible when the case is “flipped”. no word on whether this much desired watch will be made available commercially but for fans of the series and JLC, you can catch a glimpse of Jaeger-LeCoultre ‘The Dark Knight Rises’ Reverso and the original Reverso at JLC’s Geneva, London, Los Angeles, and Hong Kong boutiques. click on the thumbnails after the break for larger views.

Jaeger-LeCoultre via Hypebeast via HODINKEE

NOW READ  Save Surgical Masks For The Frontline, Use This Batman Beyond Washable Face Mask Instead