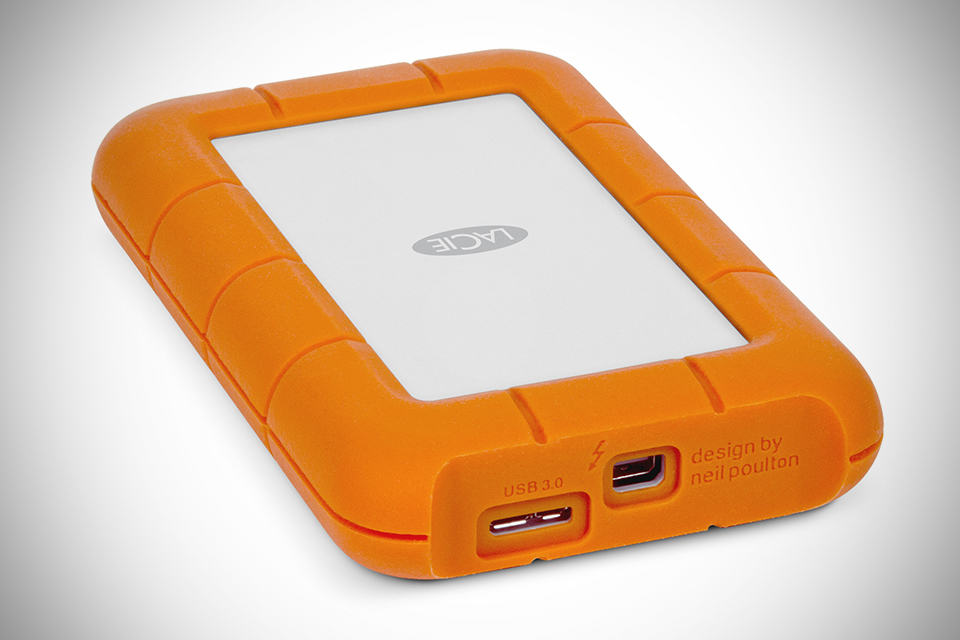 you only need one good portable hard drive but you have a few rigs with a couple of different interfaces including Thunderbolt and SuperSpeed USB 3.0, so what do you do? before September, i’d advise you to get two portable HD but lucky for you (and everyone else), there’s one drive that will take on both: the LaCie Rugged USB3 Thunderbolt Series. as the name implies, this latest ruggedized incarnation from LaCie now comes with both current high-speed connectivity: the Thunderbolt and USB 3.0, both which are bus-powered and if that’s not enough, it has a solid state drive (up to 256GB) stuffed into it, giving the super speed another welcome speed jolt. with this combination, it is said that it can now deliver a breakneck speed of up to 380MB/s and since USB 3.0 is backward compatible, users can connect this drive to virtually any standard computer on this planet. apart from the dizzying speed it offers, the LaCie Rugged USB3 Thunderbolt Series also gets the usual physical protection against any threat, including withstanding accidental drops from up to 1.2 meters (4 feet), and thanks to the SSD technology, you can be reassured that your data will be safe too. the LaCie Rugged USB3 Thunderbolt Series, designed by Neil Poulton, is available now and comes in 120GB ($199.99) and 250GB ($349.99) SSD models, as well as a 1TB HDD ($249.99) model. check out a short clip to see the LaCie Rugged in action after the break.