you heard about the prowess of the camera onboard the Nokia 1020, but we bet you didn’t know you could harness that 41MP awesomeness for aerial photography as well. amazingly, you can with the new Lehmann Aviation LA300 UAV. the LA300 is officially, the world’s first drone to utilize a smartphone’s high resolution camera for capturing high definition professional images for orthophoto and DEM applications and since it is a smartphone, it also means you can choose to take advantage of the handset’s cell network to stream live video footage for live surveillance. aesthetically, the LA300 looks identical to its sibling, the LA100, launched late last year, but instead of piggy-backing a GoPro camera, this new craft has a purpose built underbelly that allows you to attached a Nokia 1020 smartphone for aerial imaging and it is designed for long range missions with the same autonomous capability that requires no piloting skills at all.

with just a few simple steps, the LA300 could be up in the sky and doing its job. all you have to do is to enter the flight path into a free OperationCenter app installed in your Windows 8 tablet and the app will generate the “mission”, and program the drone accordingly via WiFi. from there on, it is a matter of launching this UAV by hand and let it do its thing before returning to a preset landing zone. the LA300 UAV is essentially designed with mapping and surveying operations in mind, and hence, it boasts a significantly longer flight time of 30 minutes and has a range of up to 15 kilometers. the Lehmann Aviation LA300 UAV is available for pre-order now for a cool €4,990 each (about US$6,350) with delivery expected to kick off end of September 2013. do bear in mind that this sticker does not include the required Nokia 1020 and Windows 8 tablet. 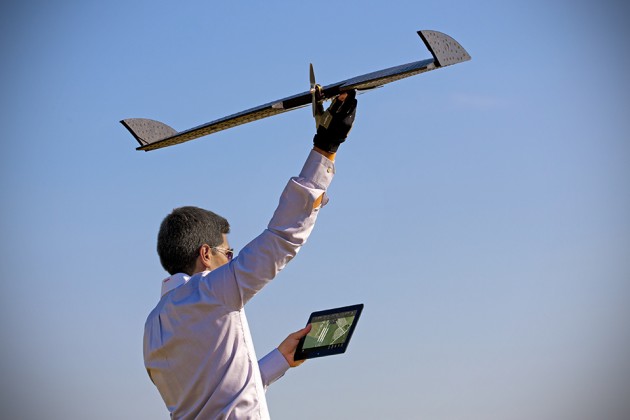