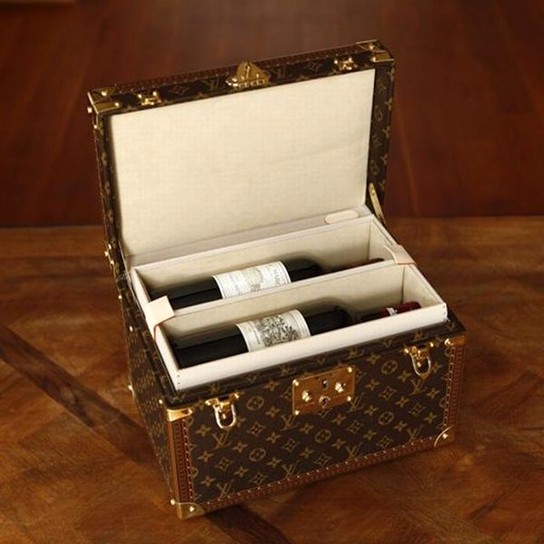 i am assuming that the super rich, when heading to some glamourous party, would bring a couple of their prized wines with them, for good-will sake or whatever. in that sense, to lug those expensive wines in a paper bag or even a box may make it look like a less-than-glamourous affair but French winemaker, Cordier Mestrezat Grands Crus has a perfect solution to this problem: encasing those precious wine in a custom made Louis Vuitton carrying case finished in the famous monogram canvas design. the carry case allows four bottles of worthy wine, like the 2008 vintages of Chateau Lafite Rothschild, Chateau Margaux, Chateau Mouton Rothschild and Chateau Haut-Brion, to be stored snugly and safely when transiting to its destination.
[ad#Google Adsense-text-468×60]

commissioned by the French winemaker and created by Louis Vuitton, the wine case was created to mark the French winemaker’s 125th anniversary and made its debut last week at the Vinexpo, the world’s largest wine trade fair held in Bordeaux. no word on its pricing or when it will be made available but you’d be doubly fast if they ever make the announcement as only three of these fine examples will be made. why am i getting a feeling that this will become one of the most sort after leather goods in Louis Vuitton’s history?

via LuxuryLaunches / The Independent