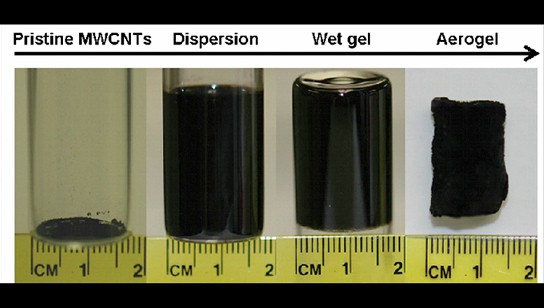 the next time when someone asked you for a smoke, don’t dismiss them immediately. they could meant to say ‘do you have batteries’. researchers from the University of Central Florida have engineered the world’s lightest carbon material which could be used to detect pollutants and toxic substances. additionally, due to its flexibility and sensitivity, the carbon nanotubes could be used in robotic application to induce ‘feelings’ to the robot’s fingers or hands, enabling them to handle anything from a power saw to holding a packet of crackers without crushing them.

the new carbon material belongs to the family of lightest solid known to man, commonly termed as the “frozen smoke”, or also known by its technical name, aerogel. the researchers created a multiwalled carbon nanotubes (MWCNT) aerogel which are so small that each of them is several thousands time thinner than a strand of human hair. in MWCNT, nanotube takes the place of silica, a major component in sand, which increases the materials’ practical application. another property of the nanotubes is its large surface area which means great amount of energy could be stored in the aerogel, thus increasing the capacity of lithium batteries or supercapacitors.

aside from energy storage and pressure sensitivity applications, the MWCNT can be developed to undertake sensing roles. taking advantage of its larger surface area, combining with improved electrical conductivity enables the development of sensor that is capable of screening for toxins in food or water supply. similarly, this technique can be used to develop equipment capable of detecting traces of explosive. in essence, this invention is a significant milestone for the researchers and its development could open up to new areas of explorations and applications.

having said that, we are excited about this development as it could realize two of our many dreams for this world: one, a longer lasting battery that people like Steve Jobs could use and two, robotic arms (or even feet) that has ability to sense or feel which could lead to the development of a humanoid that will eventually take over the world. nah. we are just kidding (about the taking over the world part). 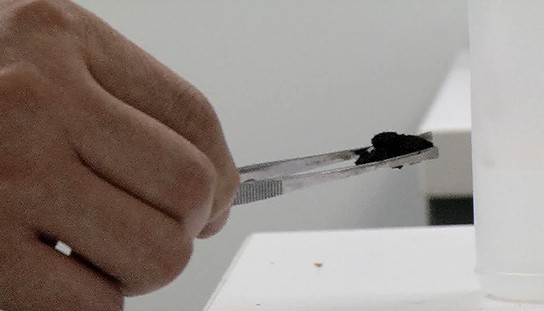 (credit: screenshot from UCF video by mike) the multiwalled carbon nanotube aerogel looks a burnt foam rubber but trust me, it is more than that

University of Central Florida via Inhabitat