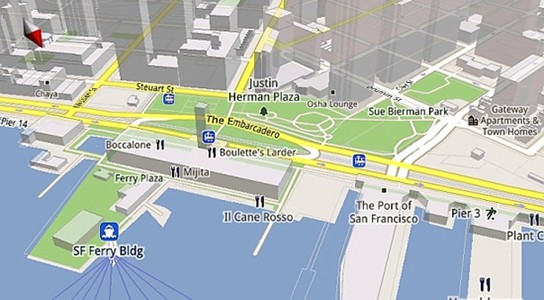 just when we thought Goggle street view is the best Google Maps could offer, it awe us once more with the soon-to-be available Google Maps for Mobile that offer 3D building data for over 100 cities. this fifth iteration of the Google Maps will feature vector graphics for 3D maps and because its vector-based it could means reduce storage space and faster load time. well, 3D in this case doesn’t mean those 3D images or videos that we are now accustomed to now, but rather just 3-dimensional images that we can rotate, tilt, panned, zoom et cetera.

sounds pretty cool. but, in terms of navigation with a map, i think 2D is still the way to go. it just feel awkward to have your route blocked by the Empire State Building and all other buildings along the route – even though the buildings are translucent. why not just see from the top which couldn’t be more straight forward. unless it has the fly-by capability where the user will ‘fly’ through the predetermined route on the 3D map to your destination, then subsequently move on to 2D i.e. birds eye view for you to proceed with the planned journey. then again, that’s just being fancy. i guess 2D is sufficient at this point.