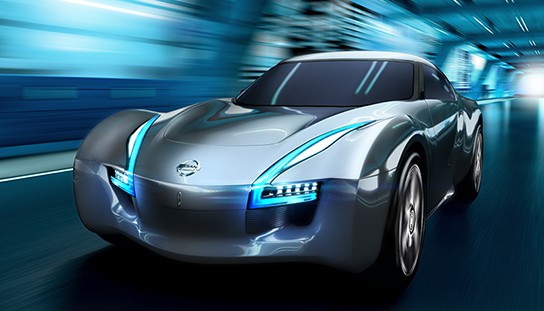 unveiled recently at the 2011 Geneva Motor Show is the concept Nissan ESLFOW which is touted as “a pure EV sports car concept.” designed from the ground up as a Zero Emission Vehicle, the ESLFOW spots a long bonnet leading to a steeply rake, wrapped around windscreen which stuck closely to Nissan sports car tradition as seen in the legendary Fairlady. powered by two electric motors, each driving a rear wheel and employing the same laminated lithium-ion batteries as use in the production Nissan LEAF, the ESFLOW is capable of a century sprint in under 5 seconds and an impressive 240 km range on one single charge.
[ad#Google Adsense-text-468×60]

the aluminum chassis, wrapped in composite body, integrates a roll cage in the ESLFOW which is unobtrusive and yet, strong enough to take the entire weight of the car in the even of roll-over. furthering its sportiness, the ESLFOW drivetrain is a sports tuned derivation from the technologies that is currently used in the Nissan LEAF. the minimalist, yet luxuriously appointed interior comes in the form of upholstered gold leather combining with perforated gold suede seats and doors trimmed in dark blue leather and suede. ESFLOW features a pair of non-movable seat built into the bulkhead, thus negating the need for heavy steel frame that usually associated with electric-motorized seat. thanks to the technology of fly-by-wire, the steering and pedals can adjusted electrically to suit different drivers.

we have seen countless concept EV as beautiful and exciting as the ESFLOW, but Nissan promised us something different with the ESLFOW: it is a production ready concept. hence it may not be a fantasy to put performance and environmental interest in the mix, and looking good at the same time. ESFLOW will be on display at the Geneva Motor Show from March 3 to 13, 2011. 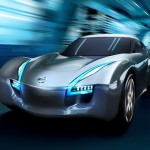 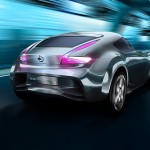 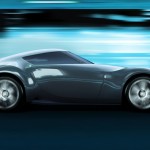