The future of transportation, private and commercial alike, will no doubt be going autonomous. Why? Because we simply can’t trust ourselves to drive, or perhaps, leaving computer to do the job will be comparatively safer than sentient beings behind the wheel? Whatever it is, we do we have a strong feeling that car-rights group will also be a thing of the future. You know, rights group who will insists that humans should be driving, not robots. Anywho, there’s no stopping this autonomous movement. Many countries have already hopped on the autonomous transportation bandwagon. Singapore already did last year and has been trialling self-driving electric buses in locations like Garden by the Bay, commercial zone one-north and Nanyang Technological University, and now, the U.S. will be doing the same too, kicking off with Washington D.C. 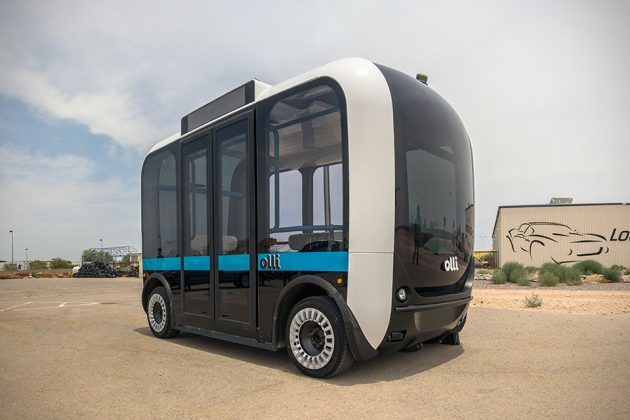 The vehicle, called Olli, is a self-driving 12-seater electric bus designed by Local Motors that will eventually ply the streets of D.C. The brain behind Olli is powered by IBM Watson to do things much like what Siri does on your phone. Passengers will be able to tell Olli where to go in their natural language, ask questions and even use an app to summon the ride. The hardware itself is entirely driven by an electric motor that turns 20 KW of continuous power (30 KW, max) and 125 Nm of torque, capable of a top speed of 12 mph (20 km/h). Regenerative brakes come as standard, naturally, and the cells onboard will provide it with up to 32.4 miles (58 km) range.

NOW READ  More Than A Facelift: Polestar 2 Is The First Rear-Wheel-Drive Polestar 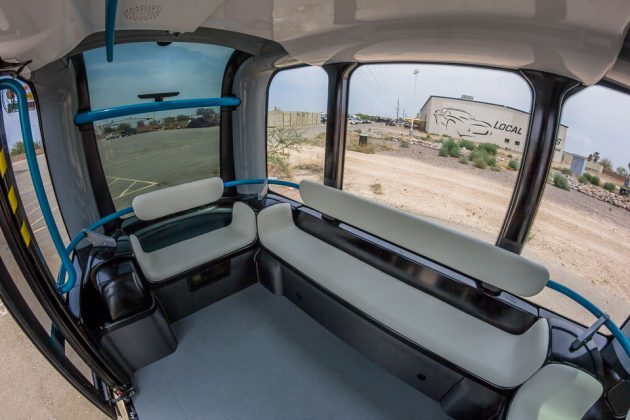 Being an autonomous, it is natural that it is outfitted with sensors like LIDAR, as well as optical camera and GPS as part of the self-driving system. The chassis is of aluminum and steel, with air suspension to improve ride comfort and yes, it is not the future, future yet and so it still rolls on the good’ol wheel-and-pneumatic tires combo. All told, the vehicle is no heavier than a minivan, weighing just 3,300 lbs (1,500 kg), though payload is limited to 2,200 lbs (1,000 kg). That’s an average of 183 lbs (83 kg) per person, including each individual’s belongings. So, the folks of the future will have to watch their weight if they don’t wish to upset fellow passengers and oh, you can’t be any taller than 6.4 feet (1.95 m) cos’ that’s the passenger room height (in case you need to stand).

Olli is set to go on trial in D.C. in next few months, after which it will propagate to Miami and Las Vegas sometime later this year and there’s a possibility that she will be roaming in cities like Berlin, Copenhagen and Canberra, but that’s subjected to the talk between Local Motors and the respective government and municipal. Before you get too excited and eager to give Olli a go, you have to know that there are no words if the ‘trial’ in D.C. will involved passengers. 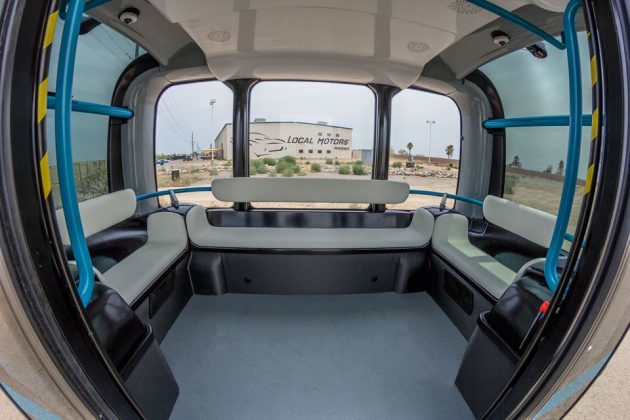