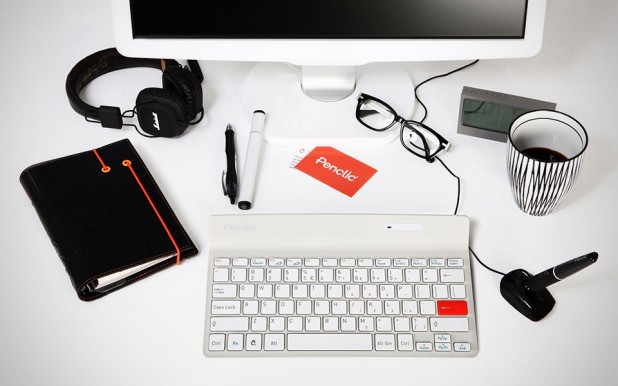 keyboard is one of those things in life that needs no further innovation but it doesn’t hurt if one could make it more streamlined with a sleeker aesthetic. that’s what exactly Swedish firm Penclic have come up with: a beautiful, thin keyboard, dubbed the Mini Keyboard that has an uncanny resemblance to Apple‘s Bluetooth keyboard. the keyboard sports a 5mm thin profile and has low profile Quiet-touch keys, resulting in a compact size that is said to allow “more relaxed and natural working position to help reduce RSI (Repetitive Strain Injury) issues from occurring.” available in both wired or wireless version, the keyboard is compatible with all operating systems that support HID 1.1 including Windows XP or later, Mac OSX version 10.1 or later and most Linux/BSD OS. the wired (or corded) model connects to your computer via a 1.4m USB cable and features scissor keys, a pair of USB ports, and a trio of LEDs indicating the status of the Num Lock, Caps Lock, as well as Scroll Lock. the wireless model, on the other hand, connects to your computer via a 2.4GHz wireless connection and powered by AAA 1.2V NiMH rechargeable battery that’s good for 2 months usage in between charges. recharging is via USB and a lone LED alerts you of the battery status. common to both are special functions key highlighted in blue (up, down, left, right, ‘F’ function keys et cetera) and numpad function which is activated by the Num Lock key. no word on its availability or pricing as of now.