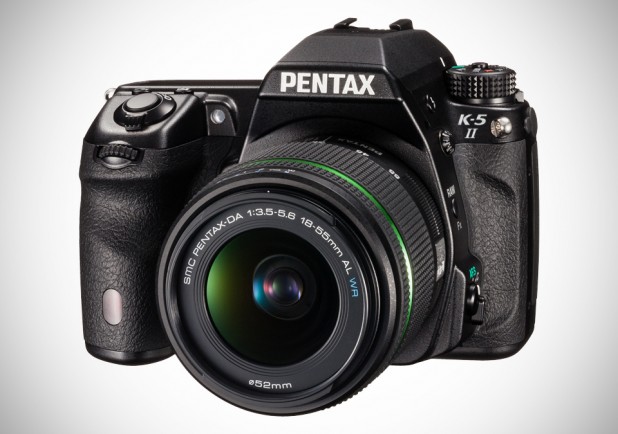 what do with a already great product? simple, take its formula for success and make it even better. that’s exactly what Pentax has done with its new flagship DSLR, Pentax K-5 II and K-5 IIs DSLR Cameras. announced ahead of the biannual Photokina (Cologne, September 18 – 23, 2012), the duo are follow-ups to the original K-5 DSLR. both cameras are equipped with 16-megapixel sensors capable of an ISO up to 51,200 and a new dust-proof, weather- and cold-resistant body. other key highlights include a newly developed SAFOX X AF sensor that is said to deliver the widest autofocusing EV range in its class, high-resolution and larger CMOS sensor ensures high-speed image data readout, Pentax Real Image Engine (PRIME) II, a 3.0-inch “air-gap-free” LCD display with anti-glare coating, Pentax’s Shake Reduction (SR) feature for blur-free images, a glass pentaprism viewfinder that enables a 100% field of view and approximately 0.92 times magnification, electronic level function with a vertical level scale, DR II aka Dust Removal II system that shakes off the CMOS sensor with ultrasonic vibration, and an extended battery life for up to around 980 shots in between charges. both the K-5 II and the K-5 IIS are essentially identical with the exception of the K-5 IIs is designed without an anti-aliasing filter for deeply rich, detailed imagery at “supreme resolution levels.” the Pentax K-5 II is slated to be available from October 2012 and carries a price tag of $1,199.95 for body-only, or $1,349.95 with the DA 18-55mm WR zoom lens and $1,549.95 if purchased with the DA 18-135mm WR zoom lens. the K-5 IIs, on the other hand, will be available in body-only for $1,299.95. larger views of both models available after the break.